This Vietnam Cambodia tour is designed to allow travelers to practice their yoga in beautiful settings while still leaving time for exploring local culture, rest and relaxing. You will have a precious 10 days to rejuvenate yourself in a tranquil surrounding, among the beauty of nature, relax your mind with our yoga retreat exercises. Treat yourself to a much-needed break from your daily grind to immerse yourself in a rejuvenating yoga and holiday combination.

Welcome to Hanoi – the charming capital city of Vietnam! Upon arrival at Noi Bai airport, warmly welcomed by our tour guide and transfer to your hotel to check in.
After a short rest, we visit the Temple of Literature, Vietnam’s first university. Constructed in 1070, the gardens and well-preserved architecture offer a relaxing glimpse into Vietnam’s past. Later, visit Hoan Kiem Lake and Ngoc Son Temple then take a cyclo tour around the Old Quarter of Hanoi. Overnight in Hanoi.

After breakfast and check out hotel, we transfer to Pu Luong Nature Reserve via a breath taking mountain pass. Enjoy panoramic view of the whole valley along the way. We arrive at Pu Luong Retreat in time for a delicious lunch with local dishes. After lunch, check in the room and have some free time to explore the beautiful retreat, with its captivating views of the surrounding and tranquil setting.
This afternoon, drive to a suspension bridge over Cham River, where we begin our walk passing stunning water wheels to reach a local fisherman’s house. Have a short rest to gear up for the rafting adventure with the local expert team. Float along the calm river and enjoy the scenic views, learn how to paddle and steer the handcrafted rafts. Arrive at Tan Lap Bridge, disembark and drive back to Pu Luong Retreat for dinner. Overnight at Pu Luong Retreat.

Wake up early for our first Yoga exercise following the instruction of the local master (Vietnamese master or Indian master). After breakfast, take a light trek into the beautiful rice terraces, through small paths to a picturesque village sitting on the foot of a towering mountain. Trek through the villages, wild fields, ponds, rivers, mountains and open land until we reach our lunch spot. After picnic lunch, enjoy free time refreshing at a nearby river. Walk up to our pickup point and drive back to the Retreat. Dinner and overnight at Pu Luong Retreat.

Wake up early for our second Yoga exercise following the instruction of the local master (Vietnamese master or Indian master). After breakfast and check out the Retreat, let’s get closer to the village life and interact with locals living upon the hills above the Retreat. We get to know the daily life of the locals, walk around working farm land and rice fields and learn to make rice wine and weave colorful textiles. Lunch will be served at a local house with a local family. After lunch, we return to Hanoi with stop en route for The Quintessence of Tonkin Show. The Show draws inspiration from the spiritual history of the nearby Thay Pagoda. With years in the making, hundreds of performers, an interactive stage, state-of-the-art technology, and a stunning setting, this live spectacle is an unamicable highlight of any trip to Vietnam. A Buffet Dinner will be served before we enjoy the show. After the show, return to Hanoi and check in the hotel. Overnight in Hanoi.

Our guide and driver will pick you up from your hotel. We will journey through picturesque rice-farming villages of the Red River Delta to Halong Bay, a World Heritage with thousands of limestone and Dolomite Island and islets. Upon arrival, embark a traditional wooden junk for cruising through the Bay, visit its breathtaking seascape created by rocky islands and emerald serene water, with stopovers to discover grottoes inside islands. You will have chance to hike up steps in caves, relax and have sunbath on beach, go swimming or take part in some beach activities. Lunch and dinner served on board. Overnight on board on the sea.

The Vietnamese call the “East Sea” by a point-oriented name “Eastern Sea”, so you may guess how miraculous seeing the sunrise over the islets of the Bay. Our boat will continue to cruise in marvelous areas, where almost each islet has its own name, adopting its shape or reminiscent like Sail island, Fisherman's head rock, Butterfly rock or Turtle islet, etc. Brunch or lunch on board. Disembark the boat and transfer back to Hanoi. Overnight in Hanoi

Wake up early for our third Yoga exercise following the instruction of the local master (Vietnamese master or Indian master). After breakfast, enjoy a relaxing morning in the capital city. Check out hotel at noon time then transfer to the airport for flight to Siem Reap – Treasure of Cambodia Kingdom. Upon arrival, pick up by our local tour guide and transfer to check in our hotel. Overnight in Siem Reap.

After breakfast, we explore South Gate of Angkor Thom known as Big Angkor, 3km2 walled and moated royal city and was the last capital of the Angkorian Empire, The famous Bayon Temple was an architectural muddle, in part because it was constructed in a somewhat piecemeal fashion for over a century. Terrace of the Elephants is an impressive, two and a half meter tall, 300 meter long terrace wall adorned with carved elephants and gradual that spans the heart of Angkor Thom in front of Baphuon - huge temple mountain in the heart of Angkor Thom, Royal Palace Area and Phimeanakas - impressive rite and sandstone pyramid. Terrace of the Leper King is at the north end of the Terrace of the Elephants, a double terrace wall with deeply carved nag as, demons and other mythological beings. Last visit Ta Prohm temple which is a wonderful combination of human genius and natural beauty! Giant trees have grown here for centuries!
This afternoon we visit Angkor Wat temple, the Cambodia's ancient temple is one of the wonders of the oriental world. Masterpieces of decorative details as well as of architectural style, its awe-inspiring ruins survive as testament to the spectacular achievements of Southeast Asia's greatest civilization. It is a replica of the universe according to the Hindu mythology. It is composed by the Mount Meru, surrounded by the continents and the oceans. Its extraordinary bas-reliefs, describe some Khmer epics and myths. Angkor Wat's five famous towers rise into the sky, a geometrical arrangement of numerous galleries, adorned with beliefs and the stone images of celestial Apsara dancers, as well as portals, chambers and courtyards. Last we visit Pre Rup was built in the 10th Century by Rajendravarman and enjoy sunset here. Evening enjoy buffet dinner with Apsara dance show – a taste of classical Khmer culture. Overnight in Seam Reap.

Wake up early for our four and last Yoga exercise at Phnom Krom Pagoda, following the instruction of the local master (Khmer master). After the exercise, return to the hotel for breakfast and a short rest. This morning, we visit Wat Thmei (Killing Field) contains a unique glass-walled stupa containing the bones of victims of the Khmer Rouge. Some of the bones were recovered from a nearby well while others are the remains of soldiers who died on a nearby battlefield. Continue to visit the "Les Artisans d'Angkor – Chantiers Ecole" the Finest Authentic Khmer Arts and Crafts.
This afternoon we visit Floating Villages, located 10 kilometers south of Siem Reap. Take a ride in a traditional wooden boat on the Tonle Sap, the "Great Lake" of Cambodia and the largest in Asia. Here we will see plenty of examples of the Khmer way of life on the Tonle Sap. Then visit Wat Bo, a highly respected pagoda founded in the 18th century, contains very unique wall paintings of the Reamker (Ramayana) that are said to be from late 19th century. We continue to one of the cities lively open markets, Psar Chars, also called the “Old Market”, where anything and everything is for sale. Overnight in Seam Reap.

After breakfast, at leisure until check out hotel (standard check out time is 12h00) and transfer to the airport for our onward flight. On the way if time permits, we visit Puok, the real and original place of the Artisans d’Angkor silk, where we see the full process of silk producing, from the silk worms munch on the Mulberry leaves to spin their cocoons which used to make silk warp. Continue to Siem Reap Airport for our departure flight. End of services.

Thank you for your patience and love, you are such a good company, hope we meet again, and I wish to you a really good and relaxing life.

Thank you for your support all these days, it was a pleasure to meet you, you are a great master and a great person, I love your vibes and I hope to see you again, you are welcome to my country, lots of blessing to you and your family. Hugs and kisses

An excellent experience with Threeland Travel

An excellent experience with Threeland Travel from start to finish. Quick replies from Katie in admin, great ground support from Sara, and great guides in both Vietnam with Jenny and Samnang in Cambodia. Stating the day with Yoga, in beautiful places such as Phu Long in the mountains, near a temple in Siem Reap and back in Hanoi, with good teachers, was perfect. Excellent planning for the trips, hotels fine, lovely food. Each day was full, inspiring and got better from start to finish! The mountain retreat in Vietnam was just gorgeous and lovely to be able to walk through rural villages and move slowly down river on a bamboo boat. Excellent shows for an insight into tradition through dance. So much to aim to see, but with only 10 days, this tour achieved masses. It is for sure to be recommended.

This was an amazing holiday. Threeland Travel was absolutely brilliant throughout with fast responses to WhatsApp messages, knowledgeable, caring and flexible tour guides who were just there to help out. Every day was better than the previous one with wow moments! A truly amazing experience and I would definitely recommend Threeland Travel. Thank you so much! 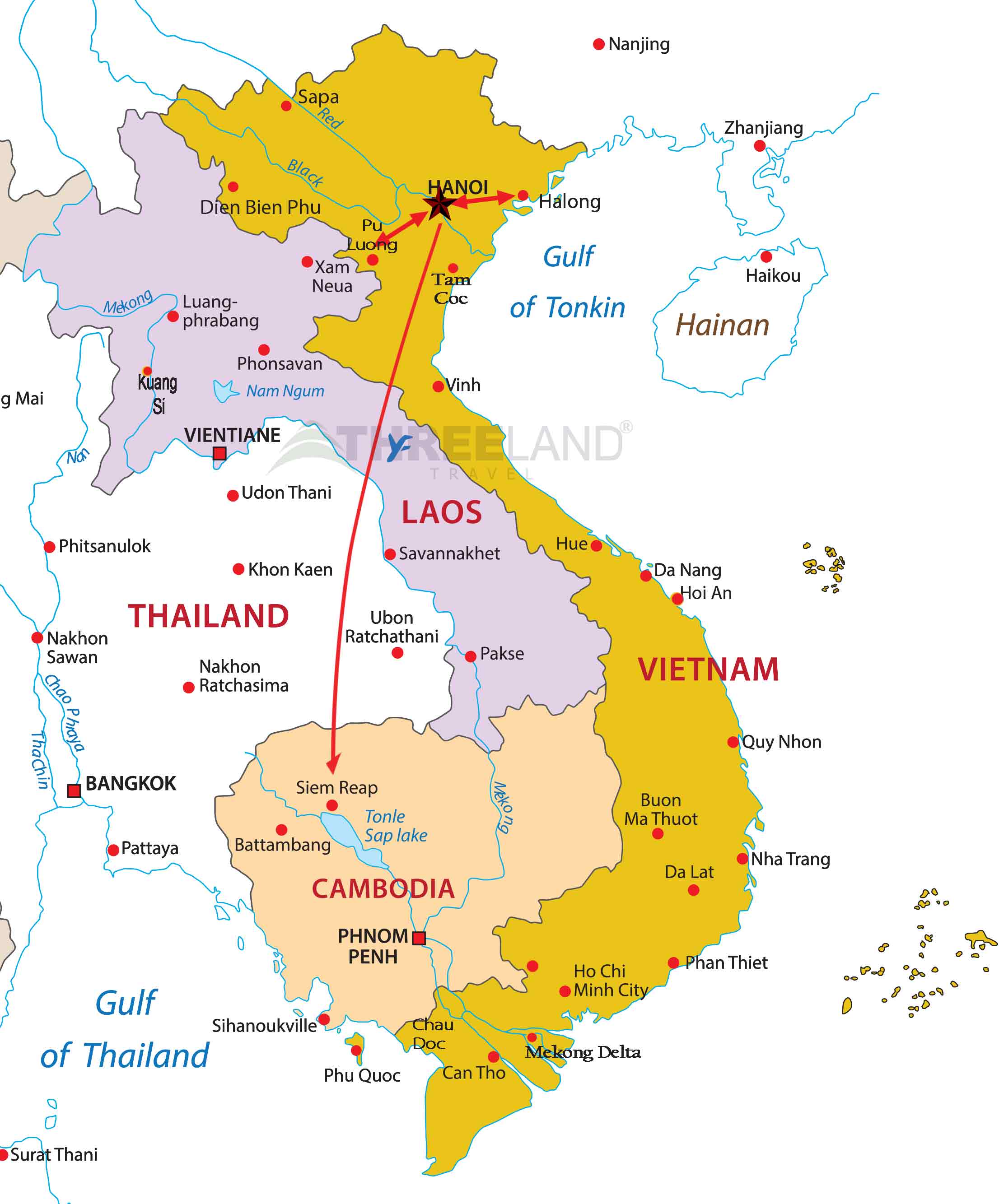