Easy to connect with Cambodia, Thailand, Singapore, Malaysia and Indonesia by short air, river and landways. Moreover, Saigon is also becoming a good transit for the best beaches in Asia, including Con Dao and Phu Quoc islands or plages on the Southern coastline.

Xin Chao! Welcome to Saigon (now known as Ho Chi Minh City) – the most hectic and business city of Vietnam. Upon arrival at the airport, welcomed by the local tour guide and transfer to the city center to check in hotel. Later, transfer to the theater to enjoy a unique fascinating show of Water Puppetry, a traditional stage art of Vietnam. Overnight in Saigon.

Breakfast at hotel. Morning pick up at hotel and join tour to visit Cu Chi Tunnels, one of the few remaining monuments to the Vietnam War. Beneath the ground lie 200 km of tunnels, dug by hand and inhabited by the forces of the Vietnamese guerillas during the conflict. At its peak, prior to the Tet Offensive in 1968, the tunnel complex was base to almost 10,000 troops. To this day, it remains one of the most impressive examples of how fierce the war used to be. You even can try to crawl some dozens of m on the tunnel underground to have the real experience. Return to Saigon and head to the Reunification Palace, the witness of the fierce Vietnam War ended in 1975. The grand building today is a Museum and Hall of official receptions. Nearby the Palace are the colonial-styled Central Post Office and the Notre Dame Cathedral, built between 1877 and 1883 and one of the city’s major landmarks. Have a walking tour on Nguyen Hue street to take the photos of the Opera House and the Ho Chi Minh Committee (outside). Then continue to the War Remnants Museum, one of the most historically important attractions in the city, where features graphic photographs, military vehicles, and various weapons related to the Vietnam War and in part, the first Indochina War. Overnight in Saigon.

Have breakfast at hotel. Morning depart to My Tho the homeland of coconut and family factories with local products like coconut candy, rice paper,… Upon arrival, embark on the boat cruising on the mighty Mekong River viewing the life to the local people live along the banks. We stop at one of 4 island in the area for sightseeing. Enjoy the fresh tropical fruits served in the heart of the garden accompanied by traditional southern Vietnamese folk music at the plantation. After that you will embark on the small boats rowed the the local people thru the small cannels with water coconut tree to visit the local factories. There you will taste the honey tea and see the local people produce the coconut candy milk and of course you also can try it or stroll in the garden where the locals feed honeybee. After that enjoy the horse-cart trip through the tranquil road of the village. We continue getting on the big boat to visit the vast area. Enjoy your light lunch at a local restaurant nearby Mekong River. Afternoon, drive back to Saigon with stop to visit Vinh Trang pagoda, a famous pogoda in the area that its architecture is a mix of Chinese, Cambodian, and French culture. Drop off at your hotel and overnight in Saigon.

Breakfast at the hotel. If your flight is in the afternoon, you will have free time for own explore and shopping before transferring to the airport for the departure flight back to your sweet home. 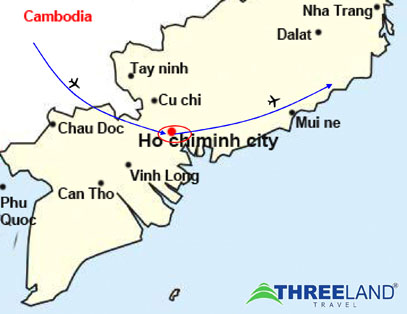