Being renowned for its unique geology, aesthetics, and archaeology values, Ha Long Bay is home to many magnificent caves. Through years, the mysterious and shimmering beauty of these caves is one of the main reasons attracting tourists from all over the world to visit and study about them. To give you even more of an idea, below you will find a list of 4 Ha Long Bay caves worth visiting in your Vietnam Holiday Packages.

Located in the heart of Ha Long Bay, Sung Sot Cave is the largest and most beautiful cave with unique shapes that are nowhere to be found. Thanks to its spectacular and magnificent beauty, Surprise Cave welcomes a great number of visitors every year. If you don’t mind the crowd, it’s absolutely a worth for sightseeing as a symbol of Halong. 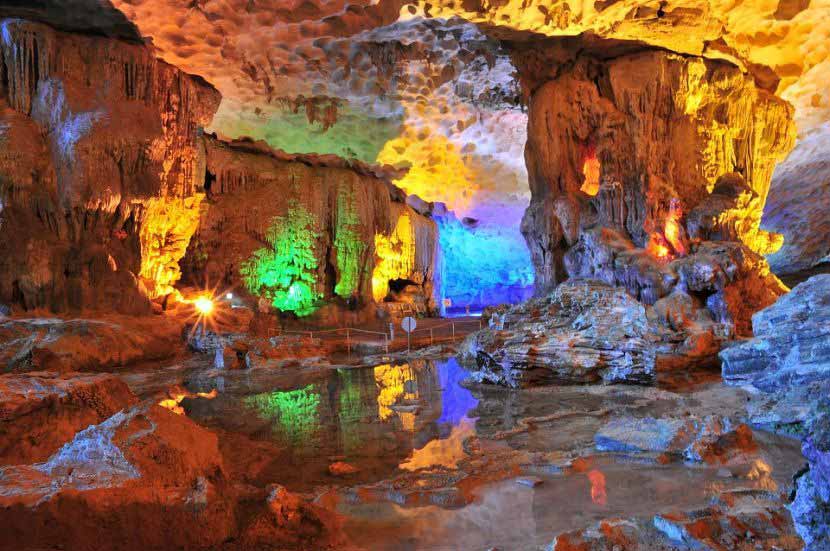 The cave area is 10000 square meters and about 30 meters high and sports a 500-meter long passage. Inside the cave is a wide range of stalagmites and stalactites in mysterious and weird shapes. You may be left speechless when witnessing the pristine fantastic thing about this fairy-tale-cave.

Before entering, you must pass the long stone staircases to pass the luxuriant forests. It takes a little bit trek to reach the cave’s entrance but once you are in, you’ll be amazed by the natural structure of this cave and various stalactites and stalagmites. At the highest peak of the cave, suddenly a "graceful garden" opened before our eyes, with a clear lake, charming landscape of paint, all kinds of plants and many species of birds. Groups of monkeys often come here to look for the fruit to cause a stir in an area. The sightseeing tour into the cave is just like a tour to witness heaven with huge spaces revealed after narrow lines. Visitors come from surprise to surprise, that’s why it is named as Surprising or Amazing Cave

Situated in the southwest of Ha Long Bay, Thien Cung Cave is one of the most magical caves as its name. As a step into the cave, you will understand why it is called “heaven”. The way leads to Thien Cung cave is craggy cliffs, covered on both sides with luxuriant forest. Through a narrow slit door, visitors suddenly see the space above a quadrilateral surface with a length of 130 meters. The more you go into the cave, the more surprised you are at the incredibly vivid, gorgeous beauty created by the stalactites. Especially, on the east wall of the grot, there's a grandiose and imposing image with characters of heroic tales. 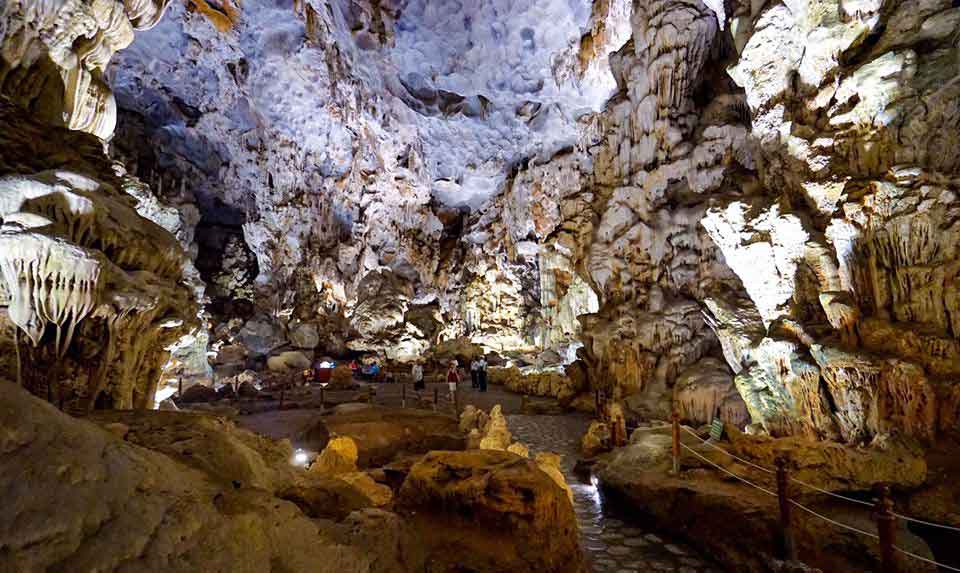 Thien Cung Cave is associated with the legend of the ancient Dragon King. The old story told that after the Dragon King helped the people defeat the enemy, the Dragon King returned to his cave. The center of this cave has four large pillars supporting heaven. From the bottom to the top, the columns are engraved with many strange shapes, such as birds, fish, scenes of human activities, flowers. Heaven Cave is like an extremely unique, sophisticated, interesting museum of art. All are created by the hand of nature with the magical and human imagination.

It can be said that Dau Go Cave is the center of ancient architecture and little stalagmites and stalactites. It is such a wonderful experience to admire the picturesque beauty of Halong Bay in this spectacular cave. The cave, which is located in Dau Go Island, has got its name from a famous battle in Vietnam’s history back in 1288. 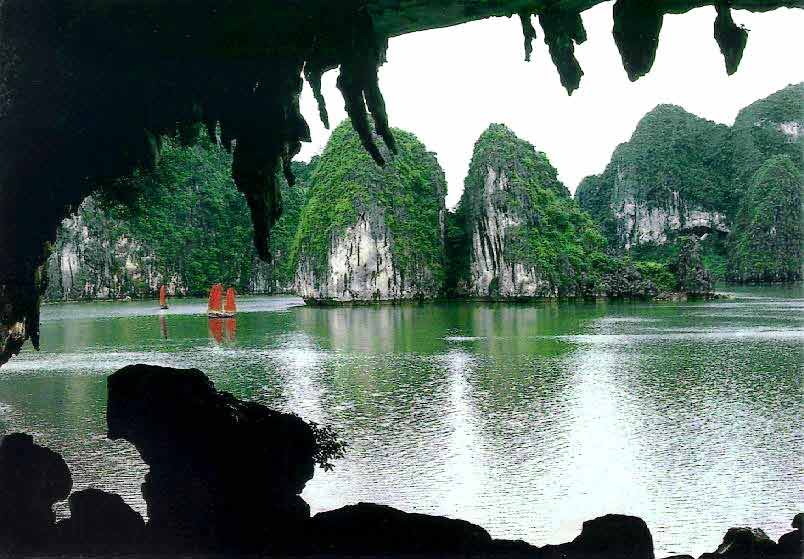 Legends say that the name Đầu Gỗ (Wooden Head) originates from the triumph of the Supreme Commander Tran Hung Dao (1228-1300) against Mongol invasion at intervals within the thirteenth Century on Bach Dang Watercourse by deploying booby traps of large steel-tipped wood stakes to a lower place. He found an away to hide all the stakes during high tides so that the Mongols could not see it. Later on, a number of those wood stakes flow to this cave and was discovered by the native individuals. 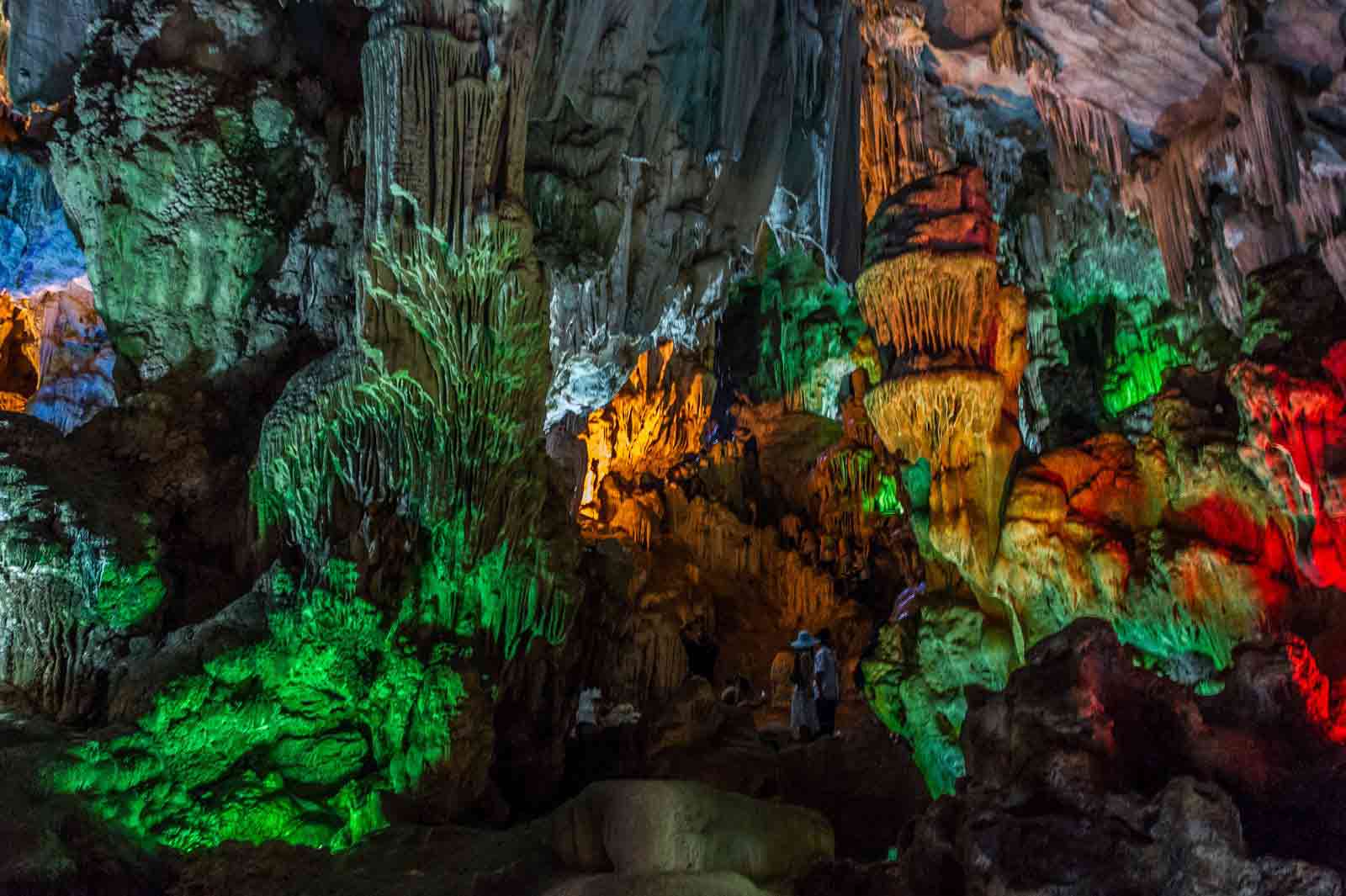 Dau Go Cave is like gathering an ancient architectural complex, exuding an ancient beauty, pristine and tranquil with small pillars, stalagmites and soaring as if they want to reach the blue sky. Featuring diverse flora, you will feel as if standing in front of a magnificent and luxurious castle with marvelous scenery.

As simple as its name – Luon Cave is simply an underground water flow in the mountains, the arch gate in the cave looks mysterious and exotic to the aesthetic. The total length of Luon Cave is about 60 meters, and the cave’s ceiling is between 2.5 meters and 4 meters, depending on the water level. On entering the cave, if the level of water is high, you must lower your head to pass it. This must be the reason why the cave is called “Luon” in Vietnamese. The cave’s ceiling has so many beautiful and magnificent stalactites that you will surprise and amaze by the creation of Mother Nature. 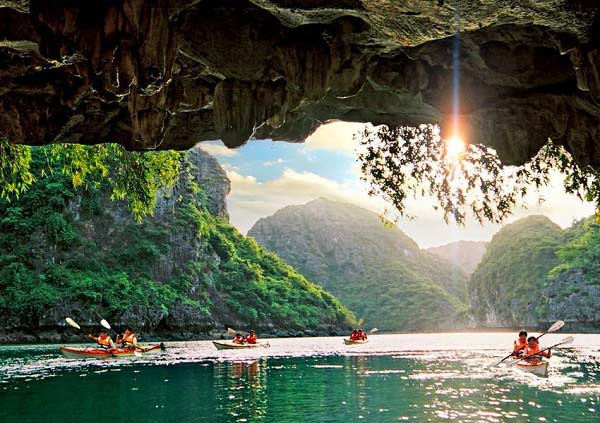 Seeing from outside, Luon cave looks like a giant bowl that is turned down to the sea surface.

Discovering Luon cave is an exciting journey of sailing through the beautiful arch gate, full of stalactites hanging down. After passing the entrance, you will see a large lake surrounded by luxuriant forest and spectacular mountains, craggy cliffs with funny golden monkeys jumping from cliffs to cliffs.

For those who’d love to try kayaking in Halong Bay, Luon Cave is the one to go. Because the height of the cave is limited to about 2.5 - 4m, you have to switch to small nan boats, each carrying about 10 to 15 people - both going in and out takes about 20 minutes. These types of caves in Ha Long Bay are not many, but perhaps the most attractive tourists here is the natural scenery. In recent times, Hang Luon is one of the attractive destinations for ex-pats paying a visit Ha Long Bay ... With the immense scenery, the majestic mountains next to the successive caves will make tourists have an interesting trip to visit Ha Long Bay.

In conclusion, each cave has its own beauty and meaning. If you have enough time, you should visit all Halong Bay Caves. With the list top 4 Halong Bay Caves that we mentioned above as well as some must-know tips when traveling in a Vietnam Holiday Packages, we hope that these things will help you a lot and make your journey become easier. 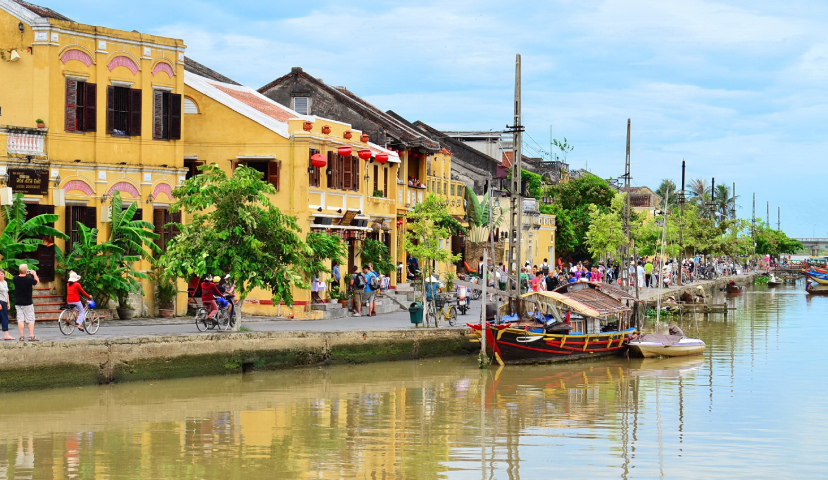 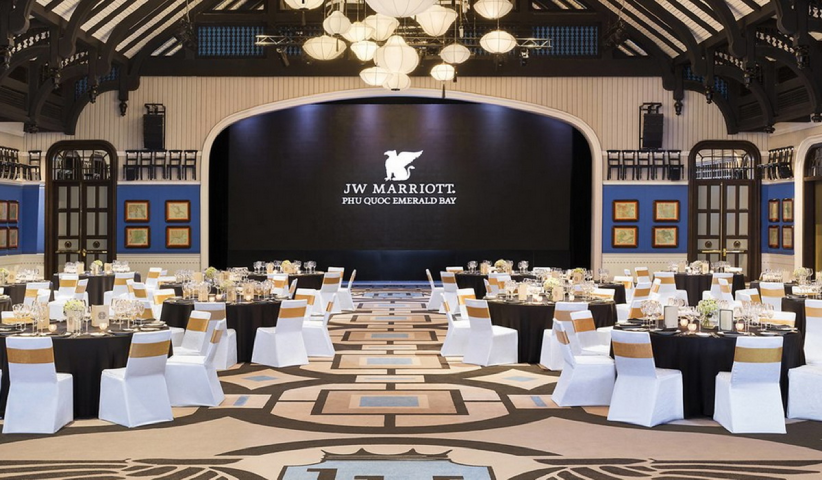 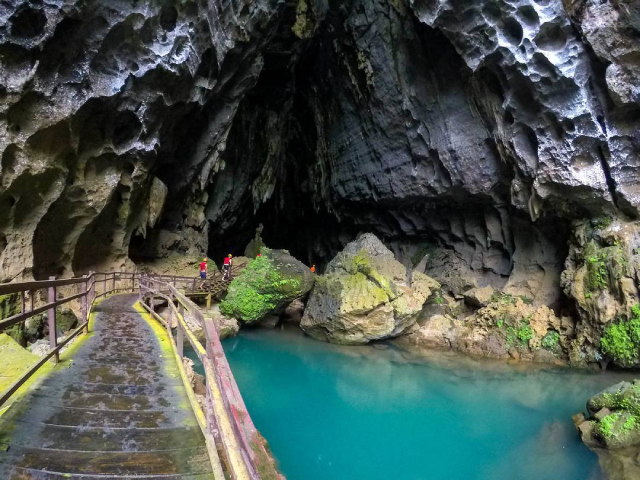 Amazing caves to visit in Vietnam
MOST VIEWED ARTICLES