Enjoy the perfect 07 Day Tour combining the must-see attractions of Vietnam and Cambodia with unforgettable, quintessential South East Asian experiences. Experience UNESCO World Heritage Sites, stunning natural beauty, ancient wonders and cultural delights as you are escorted by knowledgeable local English-speaking guides through the heart and soul of Indochina. Create cherished memories as you immerse yourself in the rich culture and warm-hearted people of the region, taking the stress out of travel as you let the experts handle the details!

Welcome to Hanoi – Vietnam!
On arrival at Noi Bai airport, our local tour guide and driver will pick us up and transfer to the centre of Hanoi then check-in at hotel. This afternoon, we visit Temple of Literature, Vietnam’s first university. Constructed in 1070, the gardens and well-preserved architecture offer a relaxing glimpse into Vietnam’s past. Stop at Ba Dinh Square and take photos of Ho Chi Minh’s Mausoleum from outside. We then visit Hoan Kiem Lake, Ngoc Son Temple then take a cyclo tour around the Old Quarter of Hanoi. Overnight in Hanoi.

Please note: Standard check in time is 14:00. Early check in is subject to availability of the hotel

Night activities suggestion: enjoy local beer at Ta Hien Streets, experience the ambience of sleepless street with life music, the young people of Hanoi and also foreign tourists. Hundred of bars and pubs in the Old Quarter are also at your disposal. Or just simple spend your time at shopping malls or various boutique Shops.

Have breakfast at hotel. This morning, we start our journey east through picturesque rice-farming villages of the Red River Delta, where we see everyday Vietnamese village life to reach to Halong Bay, a Natural World Heritage as designated by UNESCO since 1994 and 2006. Upon arrival in Halong, transfer to the pier and board a charming traditional wooden junk for cruising through the Bay. The cruise passes by rock formations with such names as Stone Dog, Incense Burner (Dinh Huong), and Fighting Cock (Ga Choi) while seafood lunch will be served on board. At the core of the islets, there is a wonderful cave to visit called Thien Cung (Heavenly Residence Grotto). You visit the cave or just choose to relax on the boat. After 4 hours of cruising and exploring the Bay, we disembark at Halong pier and return to Hanoi. Overnight in Hanoi.

Note: Only local food is available on the boat in Halong Bay

Have breakfast at hotel and check out hotel. This morning, we transfer to the airport for flight to Saigon (now known as Ho Chi Minh City) – the most hectic and busiest city of Vietnam. Upon arrival, pickup by our local guide from the airport and transfer to the city center to check in hotel.
In the afternoon, begin our city tour at the Reunification Palace. Formerly the Independence Palace of the South Vietnamese president, this 60s style was famously stormed by tanks on April 30, 1975 signifying the fall of South Vietnam. It has been preserved in its original state, and the original tanks remain on display near the entrance gates. Continue to the harrowing War Remnants Museum, which comprehensively documents the travails of the long Vietnam- American War. Inside are detailed photographic exhibitions; outside is a collection of tanks, planes and weapons. A powerful experience, this museum is guaranteed to provoke strong emotions. Pass by classic European-style landmarks such as the ornate City Hall (Hotel De Ville), the old Opera House (both may only be viewed from the outside), and pay a quick visit to the neo-Romanesque Notredame Cathedral (outside due to construction) and the Central Post Office. Overnight in Saigon.

Have breakfast at hotel. This morning, we drive to My Tho the homeland of coconut and family factories with local products like coconut candy, rice paper,… Upon arrival, embark on the boat cruising on the mighty Mekong River viewing the life to the local people live along the banks. We stop at one of 4 island in the area for sightseeing. Enjoy the fresh tropical fruits served in the heart of the garden accompanied by traditional southern Vietnamese folk music at the plantation. After that you will embark on the small boats rowed the the local people thru the small cannels with water coconut tree to visit the local factories. There you will taste the honey tea and see the local people produce the coconut candy milk and of course you also can try it or stroll in the garden where the locals feed honeybee. After that enjoy the horse-cart trip through the tranquil road of the village. We continue getting on the big boat to visit the vast area. Enjoy your lunch at a local restaurant. This afternoon, drive back to Saigon with stop to visit Vinh Trang pagoda, a famous pogoda in the area that its architecture is a mix of Chinese, Cambodian, and French culture. Overnight in Saigon.

Have breakfast at hotel and check out. Transfer to visit Cu Chi Tunnels. Located 60km from Saigon, Cu Chi is now a popular spot for both Vietnamese & foreign tourists – the network of over 200km of tunnels became legendary when they played a vital role in the War. In their heyday, the tunnels were functioning underground cities including numerous trap doors, specially constructed living areas, storage facilities, weapons factories, field hospitals, command centers & kitchens. After a short introduction video showing how the tunnels were constructed, you will have a chance to crawl into a short section of the tunnels to feel the oppressive narrowness and heat inside. Return to Saigon.
Transfer to the airport for flight to Siem Reap. Upon arrival in Siem Reap, pick up by our local tour guide from the airport and transfer to check in hotel. At leisure for the rest of the day. Overnight in Siem Reap.

Have breakfast at hotel. This morning, we explore South Gate of Angkor Thom known as Big Angkor, 3km2 walled and moated royal city and was the last capital of the Angkorian Empire. The famous Bayon Temple was an architectural muddle, in part because it was constructed in a somewhat piecemeal fashion for over a century. Terrace of the Elephants is an impressive, two and a half meter tall, 300 meter long terrace wall adorned with carved elephants and gradual that spans the heart of Angkor Thom in front of Baphuon - huge temple mountain in the heart of Angkor Thom, Royal Palace Area and Phimeanakas - impressive rite and sandstone pyramid. Terrace of the Leper King is at the north end of the Terrace of the Elephants, a double terrace wall with deeply carved nag as, demons and other mythological beings. Last visit Ta Prohm temple which is a wonderful combination of human genius and natural beauty! Giant trees have grown here for centuries. This afternoon we visit Angkor Wat temple, the Cambodia's ancient temple, one of the wonders of the oriental world. Masterpieces of decorative details as well as of architectural style, its awe-inspiring ruins survive as testament to the spectacular achievements of Southeast Asia's greatest civilization. It is a replica of the universe according to the Hindu mythology. It is composed by the Mount Meru, surrounded by the continents and the oceans. Its extraordinary bas-reliefs, describe some Khmer epics and myths. Angkor Wat's five famous towers rise into the sky, a geometrical arrangement of numerous galleries, adorned with beliefs and the stone images of celestial Apsara dancers, as well as portals, chambers and courtyards. Overnight in Siem Reap.

Have breakfast at hotel and check out. Transfer to airport for your departure flight

Please note: Hotel Check-out time is around 12.00. Late check out is not included.

-    Visa Approval letter/Visa on arrival / Fast track
-    Any flight does not mentioned and international tax
-    Early check-in and late check-out; Hotel/Room upgrade
-    Tip, drinks, personal expenses and others
-    Any service not clearly mentioned in the program 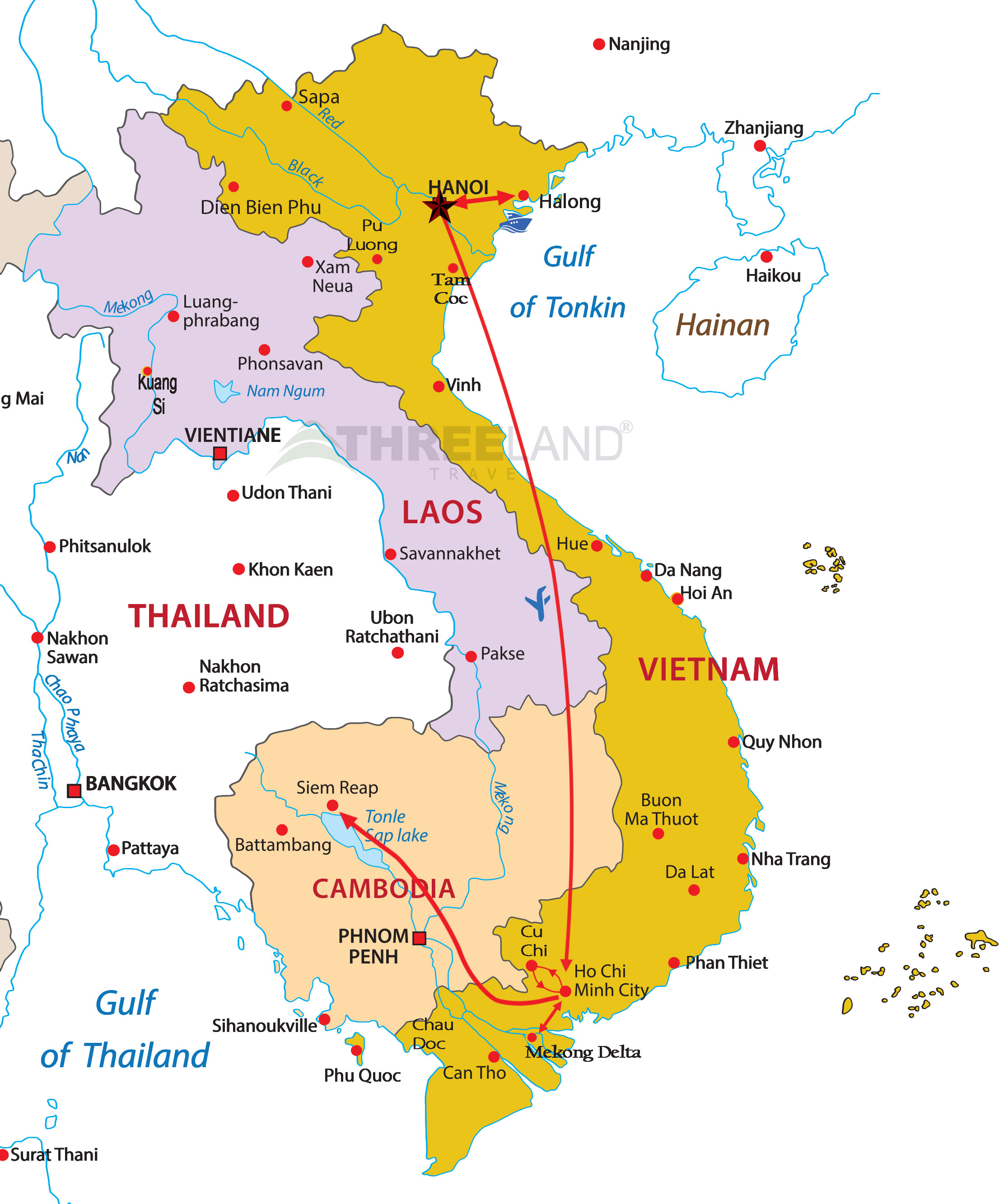