Indulge yourself in the charming cities inside Laos as well as the unspoiled nature scenery and richness of Buddhism culture.

Welcom to Laos, Vientiane, a charming and fascinating capital, with an interesting mix of Lao, Thai, Chinese, Vietnamese, French, and American influences. You will be transferred to your hotel and after a short rest, we start visiting the major sights of the capital; including the Wat Sisaket, the oldest temple with thousands of miniature Buddha statues and the former royal temple of Wat Prakeo, which previously housed the famous Emerald Buddha Image. En route to Lao’s national precious heritage, the famous and sacred structure of That Luang Stupa, you will have the opportunity to take some pictures of the imposing Patuxay Monument, which is well known as Vientiane’s own Arc de Triumph.
Overnight in Vientiane.

After breakfast, we leave the city for Nam Ngum, a huge reservoir with stopover at Ban Keun, which is famous for its salt extraction plant and a village of local Lao rice wine whisky distillation. On arrival at the lake, we embark on a long tail boat to visit fishing villages and some beautiful islets and then take a short walk to explore the lifestyle of the local fisher. On return, [if time permits], perhaps you might experience gambling at legal Lao casino located in the valley where you can enjoy the nice landscape of the lake. We return to Vientiane for overnight by late evening.

After breakfast, we visit the morning market and the weaving village of Ban Nong Bouathong (if time permits) then heading to airport for your flight. End of services. 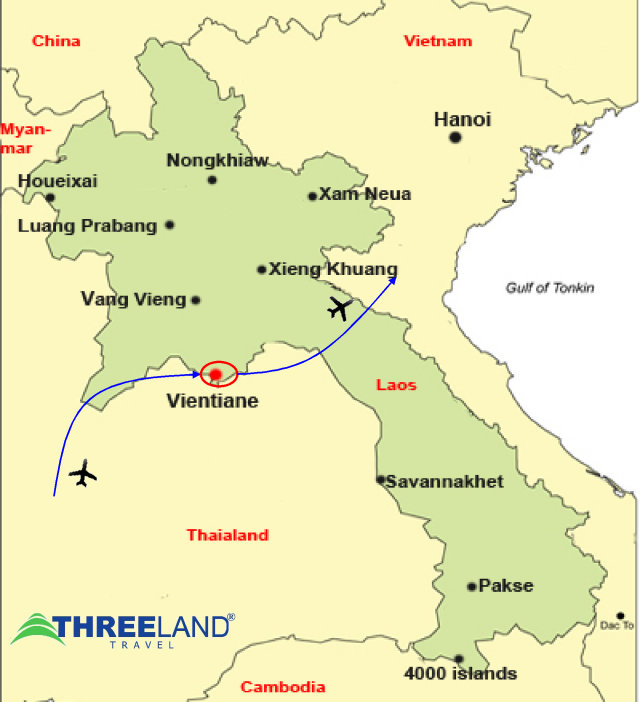