The Jewels Of Kingdom

Feast your eyes with the incredible diversity, delectable cuisines, dramatic histories and natural beauty of Cambodia, ancient Angkorian Kingdom in 8 days with this Cambodia holiday tour. This tour not only offers numerous visits to Angkor Complex temples, local villages but also give you time for culture shows and night life activities in Siem Reap. Extend your visit to the old city of Khmer - Kampong Thom, Kampong Cham, and the mountainous northeastern city of Banlung. See more details below.

You will be welcomed and greeted by our professional tour guide at Siem Reap airport and transfer to hotel (The room maybe not yet ready until afternoon). After check in, will drive to Mechhrey Eco Tourism community. Here you will have chance to enjoy optional ox cart ride through the village. You will enjoy boat ride to visit the floating village where you will see how people live on the surface of water. You will find floating house, markets, pagoda, school, hospital… Tonight we will enjoy buffet dinner with Apsara dance performance at a local restaurant. Overnight in hotel in Siem Reap.

After breakfast at hotel, visit the most famous of all the temples on the plain of Angkor:  Angkor Wat. The temple complex covers 81 hectares and is comparable in size to the Imperial Palace in Beijing. Its distinctive five towers are emblazoned on the Cambodian flag and the 12th century masterpiece is considered by art historians to be the prime example of classical Khmer art and architecture. Angkor Wat's five towers symbolize Meru's five peaks - the enclosed wall represents the mountains at the edge of the world and the surrounding moat, the ocean beyond. We continue to the  South Gate  (with its huge statues depicting the churning of the ocean of milk), the ancient capital of  Angkor Thom  (12th century),  Bayon Temple (unique for its 54 towers decorated with over 200 smiling faces of Avolokitesvara), the Royal Enclosure, Phimeanakas, the Elephants Terrace  and the  Terrace of the Leper King. We will end our day discovering Ta Prohm, one of the area's most beautiful temples. Ta Prohm has been relatively untouched since it was discovered and retains much of its mystery. Late afternoon, you will enjoy Remork ride (commonly called Tuktuk) around the city and to a local pagoda where you will have a blessing ceremony by Buddhist monk for the prosperity, happiness and safety for your trip. Overnight in hotel in Siem Reap.

Breakfast at hotel, heading out to Kompong Thom province (147 km), visit to the old city of Khmer in the pre Angkor Period (Sambor Prei kuk) and proceed to Kompong Cham, visit to Phnom Bros, and Phnom Srei temples, local market, and overnight at hotel in Kompong Cham.

Leave this morning by car from Kompong Cham and proceed to Banlung. Banlung City is the provincial capital of Ratanakiri Province in Cambodia's mountainous northeastern corner. Heavily jungled and home to 12 different 'Khmer Loeu' ethnic minority groups, Ratanakiri province has a real edge-of-the-world feeling. Free time at your own leisure. Overnight in Ratanakiry.

Breakfast at hotel. We start our adventure journey on a bumpy road for the discovery of the surrounding waterfalls. Teuk Cha Ong is the most impressive of them. Next to the waterfall of Okatchagn is a hill tribe village with elephants which may be observed in the forest. We continue to visit Ka Chaign waterfall as well as Ka Teang waterfall. Lunch local restaurant. We will spend our rest of time relaxing, swimming around at the volcanic lake of giant Loam, superb place surrounded by pristine rainforest – Boeng Yeak Laom. Overnight in Ratanakiry.

Early shopping in the Banlung market, then we transfer by overland back from Banlung to Kratie. Kratie is famous for its Dolphins Irrawaddy, whose about sixty specimens there is. The road which follows the river is lined with traditional Khmers houses rather old, and to walk is there very pleasant. Overnight in Kratie.

Breakfast at hotel. We take a long drive to Phnom Penh. Overnight in Phnom Penh.

Breakfast at hotel: today we visit Royal Palace, built by King Norodom in 1866 on the site of the old town, and the Silver Pagoda. Located within the grounds of the Royal Palace, the Silver Pagoda is so named because of its floor, which is made up of 5000 silver tiles. The treasures found inside include a solid gold Buddha encrusted and weighing 90kilograms and a small 17th century emerald and baccarat crystal Buddha. Then we continue to explore the Toul Sleng Prison Museum and the Killing Fields of Choeung Ek-both grim reminders of Cambodia's bloody past under Pol Pot. It is almost inconceivable to confront the nature of true evil here in this gentle land, but the Buddhist memorial at Choeung Ek, commemorates the 1.7 million victims of the 1975-79 Pol Pot regime. This excursion may prove distressing for some. It is, however, an important piece of this country’s historical and cultural puzzle. Transfer to airport for your departure flight.

It's a must see if you are in Phnom Penh. The royal palace and surrounding area are well preserved. Visiting with a guide is recommended!

This prison which used to be a high school is located downtown Phnom Penh. Minimal entrance fee plus headphone rental a must. You can see the interrogation and torture rooms and listen and read firsthand comments by the victims. One of the survivors is there selling his book. What Pol Pot and his cohorts did in 3-1/2 years is unmentionable. Cambodian history is painful and you have to feel for them, as it was only 40 years ago. Don’t miss this opportunity to relive history that we only read about.

The extent that these people went to torture people is unbelievable. N to think that all these happened in the last decade.if looked properly one could also see some of the remnants of the last executions out there.

Aside from the large number of tourists visiting this site at the same type, the ruins of Ta Prohm temple are amazing. Angkor was abandoned at the end of the 15th century and trees has been growing in every directions inside the site. The amazing roots combined with the temple ruins are must visit in Siem Reap.

Great Tour. One of the oldest temples in the world. Great Artwork and Handing carvings. Spent most of the day as it was so gorgeous

This waterfall is about 4.5km further on from Kachang waterfall and in total is about 11km from Ban Lung. t’s another waterfall on the exact same river, just further downstream. To get there, take the right turn about 200m before you reach the Kachang waterfall. The Katieng waterfall is about 10 metres in height and located in a very beautiful and serene forest setting.What you’ll love about it is that it’s possible to descend to the river below and clamber across the rocks and boulders that lie underneath the waterfall’s overhang. There are long vines and creepers dangling into the cave behind the waterfall from the cliffs above. Do read our in-depth guide on our website to Banlung to visit this wonderful waterfall and do some more stuff in and around Banlung. Website link given in the profile.

This waterfall is worth the visit. The road isn't good so if you go by tuk tuk you may need to walk the last 300m or so. The waterfall is in an interesting geological formation which has resulted in a cave forming into the cliff faces both sides of the water. Even more rewarding is feeding the elephant who lives there. For those who wish to ride you can however that's not our thing. She is a beautiful creature with amazing eyes and appears to be well cared for. The food is cheap so we enjoyed feeding and patting her.

This is a lovely building to visit - specially as it's still an 'operational' palace! The day we were there staff were setting up for a function so we couldn't enter one area but none the less it was spectacular. Beware the big swarms of tourist groups. Try going early to avoid them and the heat.

Wonderful Place worth to pay

I have been to visit Royal Palace in Phnom Penh. It’s a Wonderful Place and worth to pay for 10$ entrance fee with my half day tour there. The building with a nice architecture with included encrusted Buddha and silver floor.

Visited this one during high rainfall from the day before. The volume and sound were impressive and you can really go up close crawling over the carved out rocks. Behind we couldn't because there was too much water and very strong. Road to waterfall can be muddy :-)

We had only a small idea of what went on in Cambodia's recent history, and felt that we should visit Tuol Sleng (S21). The audio guide is a must - very powerful to hear the stories as you go through the rooms, and so heartbreaking. At the end I felt drained, emotionally and physically. Every visitor to Cambodia needs to see and hear this history so we can stop it happening anywhere else in the world.

We really enjoyed our tour of this Palace. It was very well kept and full of colour. The buildings and landscape are amazing. There is plenty to see and admire here so give yourself plenty of time to take it all in. I would put this as a must see in Phnom Penh.

It’s very beautiful place and full of history. The entrance fee is $10 USD and a tour guide it’s ten dollars as well. I will recommend do it with someone explain you everything, it’s more interesting

So much of Angkor Wat World Heritage site is amazing, but this temple is a stand out. Experience for 4 faced god!

I was down in here a few weeks back. The scale of the waterfall is such that I made sure to include people in the picture to provide a reference. There are some people selling various items. It's peaceful. Not at all crowded when I came through.

Visit with a strategy

A GREAT place for both photography and meditation when there are not too many noisy tourists around! Go early or be patient to let big groups of tourists do their things first. Normally, they don’t stay long. 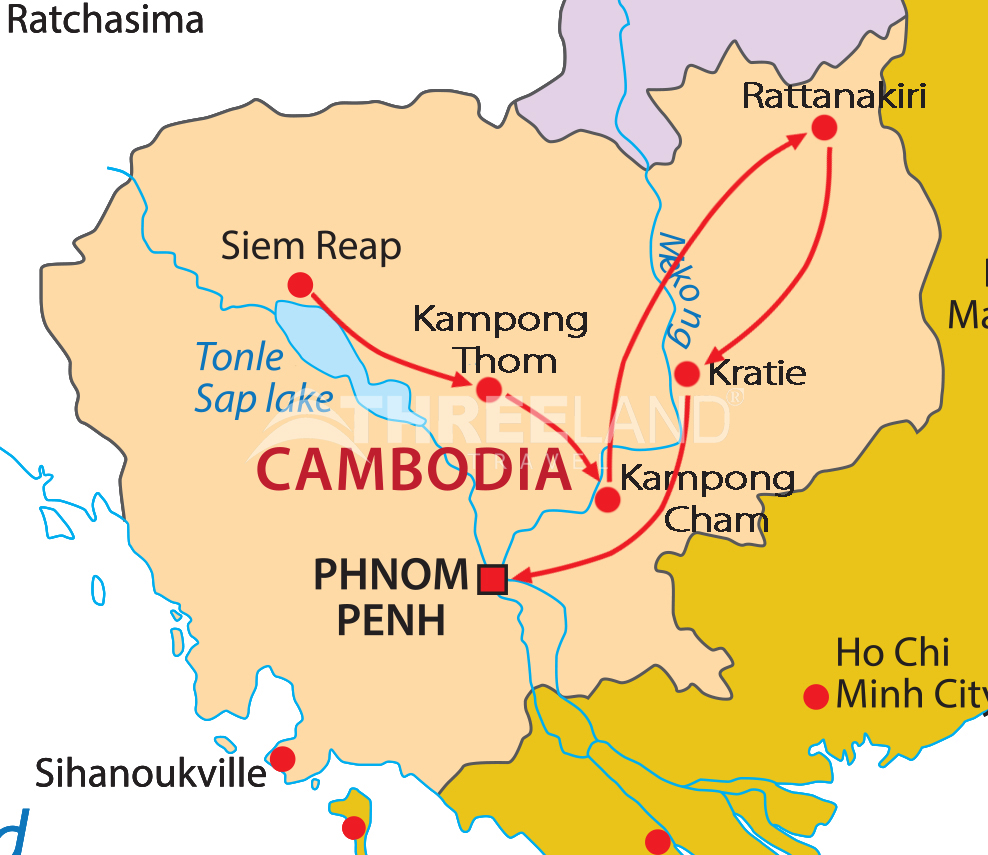 The Jewels Of Kingdom