Relish the modern and dynamic life of Southern Vietnam under year-round exotically tropical weather in 5 days, this is a wonderful start to discover the South of Vietnam with Saigon city tour to the most attractive places within then visit Cu Chi tunnels - a treasure of Vietnam’s history underground. Continue the trip to the Mekong Delta, discover the mighty river by boat among the canals and visit eco-garden / orchard of the area to learn of local daily life on the river before discovering the mysterious Angkor in Cambodia. The rich history, culture and architecture of Angkor will bring you everlasting memories.

Xin Chao! Welcome to Saigon (now known as Ho Chi Minh City) – the most hectic and business city of Vietnam. Upon arrival at the airport, welcomed by the local tour guide and transfer to the city center to check in hotel. Afternoon, we start the city tour at the Reunification Palace, the witness of the fierce Vietnam War ended in 1975. The grand building today is a Museum and Hall of official receptions. Nearby the Palace is the colonial-styled Central Post Office, one of the city’s major landmarks. Have a walking tour on Nguyen Hue street to take the photos of the Opera House (outside) and the Ho Chi Minh Committee (outside). From here, walking to Ben Thanh Market one of the most typical symbol of Saigon to experience the daily life of the locals and do shopping the hand-made goods there. Overnight in Saigon.

Please note that standard check in time is 14:00. Early check in is subject to availability of the hotel.

Have breakfast at hotel. Picked up and drive to My Tho the homeland of coconut and family factories with local products like coconut candy, rice paper,… Upon arrival, embark on the boat cruising on the mighty Mekong River viewing the life to the local people live along the banks. We stop at one of 4 island in the area for sightseeing. Enjoy the fresh tropical fruits served in the heart of the garden accompanied by traditional southern Vietnamese folk music at the plantation. After that you will embark on the small boats rowed the the local people thru the small cannels with water coconut tree to visit the local factories. There you will taste the honey tea and see the local people produce the coconut candy milk and of course you also can try it or stroll in the garden where the locals feed honeybee. After that enjoy the horse-cart trip through the tranquil road of the village. We continue getting on the big boat to visit the vast area. Enjoy your light lunch at a local restaurant nearby Mekong River with the Elephant Ear fist. Afternoon, drive back to Saigon with stop to visit Vinh Trang pagoda, a famous pogoda in the area that its architecture is a mix of Chinese, Cambodian, and French culture. Drop off at your hotel and overnight in Saigon.

Please note that a normal lunch with local food will be served.

Have breakfast at hotel. Morning visit Cu Chi Tunnels, one of the few remaining monuments to the Vietnam War. Beneath the ground lie 200 km of tunnels, dug by hand and inhabited by the forces of the Vietnamese guerillas during the conflict. At its peak, prior to the Tet Offensive in 1968, the tunnel complex was base to almost 10,000 troops. To this day, it remains one of the most impressive examples of how fierce the war used to be. You even can try to crawl some dozens of m on the tunnel underground to have the real experience.
This afternoon, we transfer to the airport for flight to Siem Reap. Upon arrival in Siem Reap, pick up by our local tour guide from the airport and transfer to check in hotel. At leisure for the rest of the day. Overnight in Siem Reap.

Have breakfast at hotel. This morning, we explore South Gate of Angkor Thom known as Big Angkor, 3km2 walled and moated royal city and was the last capital of the Angkorian Empire, The famous Bayon Temple was an architectural muddle, in part because it was constructed in a somewhat piecemeal fashion for over a century. Terrace of the Elephants is an impressive, two and a half meter tall, 300 meter long terrace wall adorned with carved elephants and gradual that spans the heart of Angkor Thom in front of Baphuon - huge temple mountain in the heart of Angkor Thom, Royal Palace Area and Phimeanakas - impressive rite and sandstone pyramid. Terrace of the Leper King is at the north end of the Terrace of the Elephants, a double terrace wall with deeply carved nag as, demons and other mythological beings. Last visit Ta Prohm temple which is a wonderful combination of human genius and natural beauty! Giant trees have grown here for centuries! This afternoon we visit Angkor Wat temple, the Cambodia's ancient temple is one of the wonders of the oriental world. Masterpieces of decorative details as well as of architectural style, its awe-inspiring ruins survive as testament to the spectacular achievements of Southeast Asia's greatest civilization. It is a replica of the universe according to the Hindu mythology. It is composed by the Mount Meru, surrounded by the continents and the oceans. Its extraordinary bas-reliefs, describe some Khmer epics and myths. Angkor Wat's five famous towers rise into the sky, a geometrical arrangement of numerous galleries, adorned with beliefs and the stone images of celestial Apsara dancers, as well as portals, chambers and courtyards. Overnight in Siem Reap.

Have breakfast at hotel. Free until time transfer to airport for our departure flight.

Please note: Hotel Check-out time is around 12.00. Late check out is not included.

-    Accommodation in the category chosen or similar (subject to availability).
-    Meals as mentioned in the program. B: Breakfast, L: Lunch, D: Dinner.
-    Transportation by air-conditional vehicle
-    Local English speaking guides in Vietnam & Cambodia(different guide in different city)
-    SIC tour to Mekong Delta and Cu Chi Tunnels
-    Waters during tour day
-    All entrance fees and sightseeing as mentioned in the program.

-    Visa Approval letter/Visa on arrival / Fast track
-    Any flight does not mentioned and international tax
-    Early check-in and late check-out; Hotel/Room upgrade
-    Tip, drinks, personal expenses and others
-    Any service not clearly mentioned in the program 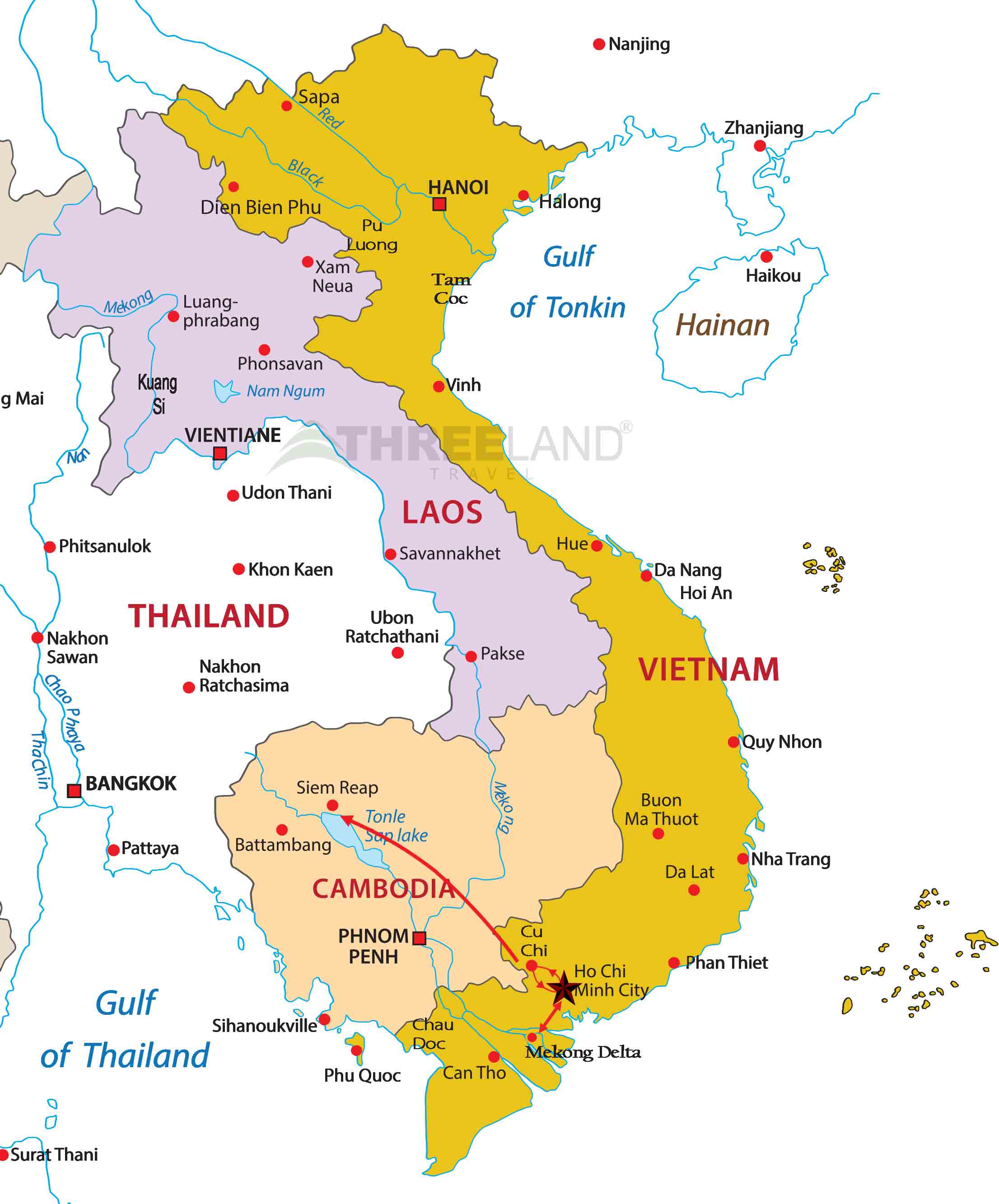