Myanmar at a glance

This Myanmar tour is a tailor-made journey to discover the best selected highlight attractions in a limited time frame. The tour starts from contemplating Bagan, the largest and densest concentration of Buddhist temples, pagodas, stupas and ruins in the world, exloring Inle Lake, its floating villages, temples, gardens and the unique way of life of the local people and ending at Mandalay with a nature focus of the city is an abrupt hill, rising above a vast moated and walled square.

Upon arrival, pick up by our tour guide and transfer to the hotel in the city centre. Yangon, formerly known as Rangoon, is a relatively quiet and charming city. Its impressive colonial and spiritual heritage makes it one of the most fascinating cities in Southeast Asia.  Standard check in time is 14h00, early check in upon availability. This afternoon, we transfer to visit Sule Pagoda, a 2200-year-old temple surrounded by government buildings and commercial shop. Walk from here to Mahabandoola Park and visit the Independent Monument. Continue our tour by car, passing City Hall, little india and little china, Strand road and Yangon Jetty. End our tour today at Shwedagon Pagoda, one of the wonders of the world. It was built 2500 years ago and enshrined with hair relics of Buddha and a place where to meet devoted Buddhists meditating and praying. Enjoy breathtaking views of the golden stupa from this vantage point. Overnight in Yangon.

After breakfast and check out hotel, we transfer to the airport for the flight to Bagan. Bagan, located on the banks of the Ayeyarwady (Irrawaddy) River, is home to the largest and densest concentration of Buddhist temples, pagodas, stupas and ruins in the world with many dating from the 11th and 12th centuries. On arrival, pick up by our local guide at the airport and transfer to an elevated temple for a panoramic view of the magnificent plains of Bagan. Continue to visit the golden Shwezigon Pagoda, first and prototype monument, which was built in Myanmar style in 1087. We then visit to Gubyaukgyi, a cave temple at Wetkyi-Inn Village which is well-known for its exquisite jataka mural paintings and the elegant Htilominlo Temple noted for its fine plaster carvings and glazed sandstone decorations. Transfer to check in hotel and avoid the midday heat. This afternoon, we visit to a traditional lacquer ware workshop where we observe the production of one of Myanmar’s best-known handicrafts. Continue to Ananda Temple, an architectural masterpiece and one of Bagan’s most beautiful temples.  Built in the early Mon-style, Ananda contains two unique Buddha images whose expressions seem to change depending on the distance from which the statue is viewed. From here, we visit to Thatbyinnyu, the highest temple in Bagan, and the massive Dhammayangyi Temple, noted for its remarkable brickwork, and Sulamani Temple. End the day with an unforgettable sunset view over the plains from the upper terrace of one of the temples. Overnight in Bagan.

After breakfast and check out hotel, we transfer to the airport for the flight to Heho. On arrival, pick up by our guide then from Heho, a scenic one-hour drive leads us to Nyaung Shwe, the gateway village to Inle Lake. Along the way, stop at the wooden Shwe Yan Pyay Monastery which is an elegant ancient monastery with its oval-shaped windows. We will also stop in Nyaung Shwe for a short walk around town and visit to the colorful market if it is being held that day. Upon reaching the edges of Inle Lake, board a private motorboat to head out to Inle Lake, one of Myanmar’s most spectacular sights. Pass villages built on stilts over the lake, observe the leg-rowing fishermen and see their floating gardens built up from strips of water. Visit Phaung Daw Oo Pagoda, famous for the 800 years old Five Buddha statues which are covered in gold leaf. Explore the local crafts of Inle Lake with a stop at the weaving village of Inpawkhone and a cheroot factory, where the typical Burmese cigars are made by hand. If time permits, there may be time to enjoy a short walk through one of the lakeside villages. Overnight at a hotel on Inle Lake.

After breakfast and check out hotel, we transfer to the airport for the flight to Mandalay. Mandalay is Myanmar's cultural capital. The nature focus of the city is an abrupt hill, rising above a vast moated and walled square. On arrival, pick up by our local tour guide and transfer to check in hotel. This afternoon, we visit to Mahamuni Pogada, 13ft-high sated Buddha image which is one of Myanmar's most famous. We then visit Kuthodaw Pagoda, whose 729 marble stone slabs of Buddhist scriptures have earned it the title ‘World’s Biggest Book’. Continue to Shwenandaw Monastery, the only remaining building from the 19th century Royal Palace. This grand teak building is known for its exquisite woodcarving. Head to the top of Mandalay Hill to enjoy magnificent views of the city and Irrawaddy River. Overnight in Mandalay.

After breakfast, at leisure until check out hotel and transfer to the airport for the departure flight. Standard hotel check-out time is 12h00 (late check out upon availability).

My friend and I would like to thank Jenna and the entire team at Threeland Travel who made our entire trip to this beautiful country a huge success. The guides and drivers were very nice and as well as being informative they also had a great sense of humour so we had plenty of laughs along the way. I have already begun to pass the information on to my friends who are planning to book a tour to Myanmar in the future.Thanks to you all.

They planned everything for us around Bagan temples seightseeing and a sunset boat cruise. The guide was great explaining everything about Bagan and also she helped us a lot taking pictures. Her name was Nara and we can highly recommend her.

Lucy fromThreeland Travel planned a very nice trip through Myanmar. High diversity of interesting place. We met a lot of local people and had different guides for each place. Very very safe country and great guides! We enjoy a lot! Thanks Lucy ;)

My friends and I were traveling Myanmar and had an open day so I decided to scheduled a day tour to learn a little bit about Bagan. GOOD CHOICE!! Ms Rosie was amazing to email and work with and made all of our dreams come true. Our tour guide was Ni Mol (ASK FOR HIM!), he was so sweet, kind, informative and helpful. He took us to temples, pagodas, lunch, a parade, a market, sunset on a boat ride, and so much more! He also helped us figure out our bus ride for the next day and arranged for a driver to pick us up and drive us to it, for free. Our day with Ni Mol was by far our favorite day in Myanmar! Thank you so much for enhancing our experience and being so easy and fun to work with!

Went to Yangon for work and decided last minute to extend to see the city. 2 days before I contacted the travel agency (Jenna) and it was all sorted out last minute! Really good service and reply to get it still done in such a short time. On the day itself I had a private tour (1-on-1) with Ms Nara. Honestly, one of the best tours I ever had. Very very knowledgeable and willing to change plans on the spot. Stayed longer at some places and shorter at others. Really perfect guide! In total I had a very good impression of Myanmar & learned a lot. I’m sure if I just went on exploration on my own it would’ve been so different. Again great tour and from my side very recommended!

Excellent service from Lucy who worked with us to set up the tour, checked on us during the trip and followed up afterwards to see if we were happy. Our guide for trekking and on the lake, Mr Bun Von was superb. We especially enjoyed the evening walk around the village where he helped us to explore the real life of the villagers. Pounding rice, watching the men make baskets, helping the ladies to plant ginger, dancing with the young girls and just seeing how things worked in the village was an experience I’m sure that our daughter or us will never forget. Ms Nara , the guide in Yangon and Bago was excellent at teaching us about the Buddhist culture and pointing out the small things that otherwise we would have missed. The drivers were safe and the trekking cook did an excellent job as well.

The tour of the Inle Lake is well worth a visit. the market has nice things, some of which you won't see anywhere in Myanmar. The 1054 stupa pagoda at the end of the tour is mind-blowing, really amazing!! Upon suggestion of our hotel (thanaka) we added a visit to the burmese cat breeding center that is also a hotel and restaurant, really cool, you can play with the kittens for 30min. this is very unique location, we rec you visit after the heath of bagan!

Wonderful 8 days tour of Myanmat. Professional guides, knowledgeable and nothing a problem. Also Rosie in the office was very efficient. Couldn’t rate them highly enough

An excellent service+experience. Definitely one to recommend 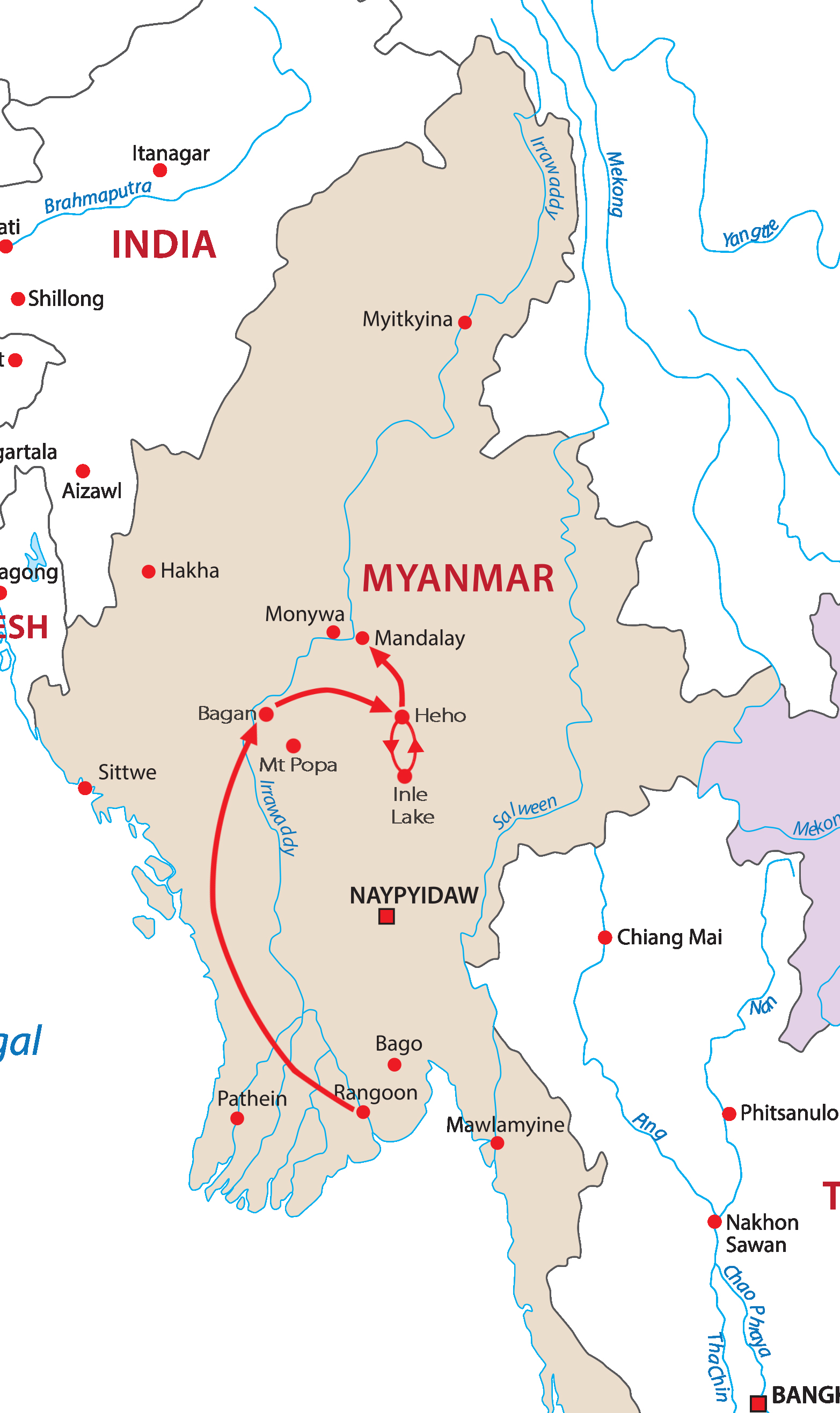 Myanmar at a glance