A combination of adventure and culture expedition in Laos that will take you to the country's must-see spots. This tour takes you off the beaten track into the remote areas of northern and southern Laos. On this tour you will venture by traditional boat along the Mekong River passing some of the most amazing mountain sceneries and journey through many fascinating hill tribe villages, waving to the warm and friendly locals.

Upon your arrival at the border, you will be met our guide then take the local boat down the Mekong river to Pakbeng. This part of the Mekong river is quite narrow and both banks of the rivers are bordered by amazing scenery of beautiful green forests and towering hills. We drift along the river to observe rural life close up and visit minority ethnic groups. Overnight in Pakbeng.

After breakfast, we leave Pakbeng and drive into the remote mountainous area in Northern Laos. The verdant rugged mountain scenery combined with the colorful hill tribes makes this an unforgettable experience. Oudomxay province is residence of 23 ethnic minority groups. We make stops along the way to see the villages of friendly minority groups of Hmong, Khmu, Akha and Taidam. The journey continues to Nong Khiaw through areas with dramatic landscape and visit the villages of Hmong hill tribes. Nong Khiaw is a tranquil village situated by the banks of the river with stunning mountainous scenery. Overnight in Nong Khiaw.

After breakfast, we will take a traditional boat downstream on the Nam Ou peaceful river with stopover at some weaving villages of Khmu. Our boat trip stop at Pak Ou, the T-junction of Nam Ou and Mekong river. We visit the mysterious Pak Ou caves, two linked caves crammed with thousands of gold lacquered Buddha statues of various shapes and sizes left by pilgrims. We continue our trip to the UNESCO World Heritage City of Luang Prabang, the ancient royal capital with its gleaming temple roofs, and fading colonial architecture. The roads are quiet with little traffic and you will see monks dressed in orange robes scurry in all directions carrying umbrellas shading themselves from the Sun. We will go up with 329 steps to the top of Mountain Phousi for an exploration of the sacred, gilded stupa and to enjoy a beautiful sunset view of the city and its glowing reflection on the Mekong river. We explore the night market, where you can find a lovely selection of handmade textile made by locals and hill tribe people surrounding Luang Prabang. Overnight in Luang Prabang.

Early wake up for a fantastic opportunity to participate in the daily morning rituals of saffron-clothed monks who collect offerings of Alms (ubiquitous sticky rice) from the faithful residents. This tradition is very unique in Laos, being the only Buddhist nation still preserving the procession. From 1353 until 1545 the city was the capital of Lane Xang before power was transferred to Vientiane. Then back to the hotel for breakfast. You will spend the day exploring the temples and sites in what is called one of the last Shangri-La’s of Southeast Asia. You will visit Wat Xiang Thong, the most important Buddhist monastery in the country and some smaller but interesting Wat Visoun, Wat Khili and Wat Mai. We go to the former Royal Palace, now a National Museum (close Tuesday) where you will find ornate, gilded and brocaded reception rooms, as well as Buddha and spectacular artifacts including the Prabang, a large holy image, which was given in the 14th century by the Khmers to King Fa Ngum. Overnight in Luang Prabang.

After breakfast, we leave this charming city in the early morning for Vang Vieng. Our journey will be uneasy as we drive along the winding mountainous road. In the afternoon we arrive in Vang Vieng, a small and tranquil town, which is nestled on a bend of the Nam Song River. Its stunning scenery with a mixture of quiet atmosphere and limestone outcrops remains unspoiled. We visit Tham Hoy, a large 7kms-length cave and surrounding hill tribal villages of Khmu and Hmong. Overnight in Vang Vieng.

After breakfast, we take half day driving to the capital city Vientiane, which is located on the banks of the Mekong river. Vientiane is a charming and fascinating capital, with an interesting mixture of Lao, Thai, Chinese, Vietnamese, French, Soviet and American influences. We visits some major sights including the oldest temple Wat Sisaket with thousands of miniature Buddha statues and the former royal temple of Wat Prakeo, which previously housed the famous Emerald Buddha image. En route to Lao’s national precious heritage, the famous and sacred structure of That Luang Stupa, you will have the opportunity to take some pictures of the imposing Patuxay Monument, which is well known as Vientiane’s own Arc de Triumph. Overnight in Vientiane.

After breakfast, we head out to the southern to central Lao city Lakxao along one of the routes of the famous Ho Chi Minh Trails. On the way, we visit local villages and enjoy the great scenery of the surrounding limestone mountains and an overview of the peaceful landscape on Nam Theun River. Overnight in Lakxao, a little town near the Laos - Vietnam border gates.

After breakfast, free at leisure before heading to to the border between Laos and Vietnam for your continuous Vietnam tours. 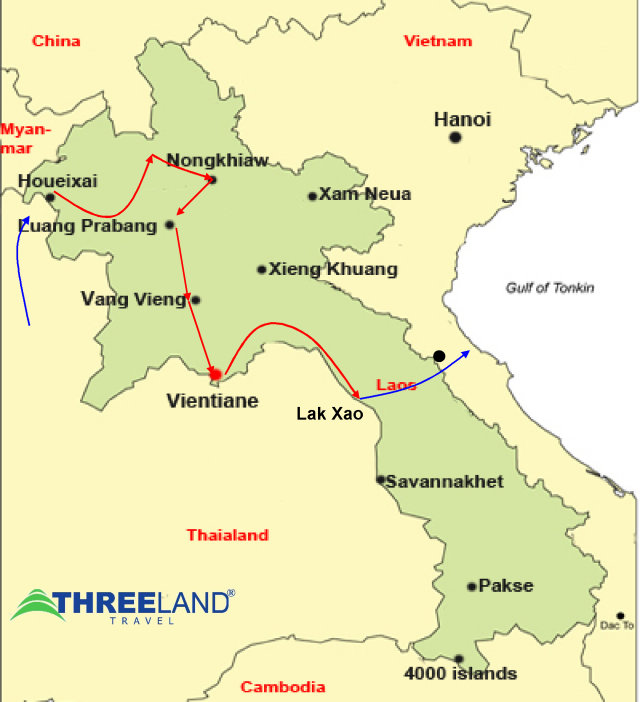