Into The Wild At Cat Tien National Park

Discover exotic wildlife and colorful bird species while trekking through the tropical jungle to the Crocodile Lake. You will see fantastic birds and some gliding lizards along the trails.

We will depart early for the long drive from Saigon to Cat Tien National Park.
Upon arrival we will take a ferry across the Dong Nai River to Park Headquarters where we will check-in, settle into our rooms at the Guesthouse and have lunch. After lunch we will begin our exploration of this incredible park. Cat Tien protects 77 species of mammals, 326 species of birds, 457 species of butterflies and numerous reptiles, amphibians, fish and invertebrates. Among those species are some of the rarest animals in the world: Leopard, Asian Elephant, Gaur (the largest species of wild ox), and Clouded Leopard are just a few of the mammal highlights. These large mammals are rarely seen, but we do have a good chance of seeing Sambar Deer, tree shrews and primates. Cat Tien is home to some endangered primates and we could see Buff-cheeked Gibbon, Black-shanked Douc Langur and Long-tailed Macaques. Cat Tien is blessed with fantastic birds including Green Peafowl, Orange-necked Partridge, Siamese Fireback Pheasant, and numerous hornbills, broadbills, and babblers. The Park is also one of the last strongholds for the Siamese Crocodile. We will overnight at the rustic, but comfortable Cat Tien Guesthouse. After dinner we will have a night game drive in the park to look for Sambar and Barking Deer, civets, owls, ferret-badgers and other nocturnal creatures. Overnight at Cat Tien Guesthouse.

This morning we will have an early breakfast before begin our hike to Crocodile Lake. The hike winds through an incredible rainforest and we will walk slowly and quietly in order to maximize our chances of viewing wildlife. We could see primates and fantastic birds such as Germain's peacock-pheasant, Bar-bellied Pitta, Orange-breasted Trogon and Red-and-black Broadbill. We should also see gliding lizards along this trail as they cling to tree trunks and extend their dewlaps in territorial displays. Once we arrive at Crocodile Lake, we have lunch and have some time to rest during the heat of the day. In the late afternoon we will watch the area around the lake and after dinner we will spot light the lake and lake shore looking for Siamese Crocodiles, Wild Boar, civets and Sambar Deer. We will overnight tonight in communal rooms or tents provided by the Park. Crocodile Lake is a working ranger station and as such the accommodations are quite basic, but the wildlife, and the experience of being on the lake, will make one night of rusticity worthwhile. Overnight in a guesthouse.

After breakfast, continue the journey in Cat Tien. The real magic of Cat Tien can best be witnessed early in the morning at Crocodile Lake. Mammals can sometimes be seen coming to the water to drink, but the birdlife is fantastic. Flocks of Lesser Whistling Ducks dabble in the shallows while Stork-billed Kingfishers, Grey-headed Fish-Eagles and Purple Herons hunt for fish. Bronze-winged Jacanas, Greater Painted Snipes and Purple Swamp Hens work the shoreline and both Yellow and Cinnamon bitterns haunt the reeds. Great Hornbills hop through the treetops and male Green Peafowl sometimes fan their incredible feathered tail as they dance near the lake. Crocodile Lake in the morning is a glimpse of what much of Asia used to look like and will hopefully provide some awe-inspiring highlights. After our morning on the lake we will hike back along the trail watching for wildlife as we go. Once we reach the trailhead we will transfer back to our rooms at the Cat Tien Guesthouse and wait for the heat of the day to subside. In the late afternoon we will use a vehicle to explore other areas of this great park – most likely the road to Silver Falls which goes through some incredible forest and is home to Silvered Langurs and a great variety of birds. We will have dinner and overnight at the Cat Tien Guesthouses.

After breakfast, this morning we will have an early boat trip along the Dong Nai River to view wildlife along the riverbanks. This is a great way to see wildlife including some that may be difficult to see otherwise like Woolley-necked Stork, Blue-bearded Bee-Eater, Long-tailed Macaque and maybe even a Brown Fish-Owl if we are really lucky. After our boat trip we will return to park headquarters and have a chance to pack before lunch. After lunch we will ferry across the Dong Nai River where our bus will be waiting to take us back to Ho Chi Minh City. Transfer to Tan Son Nhat airport for your departure flight. End of services! 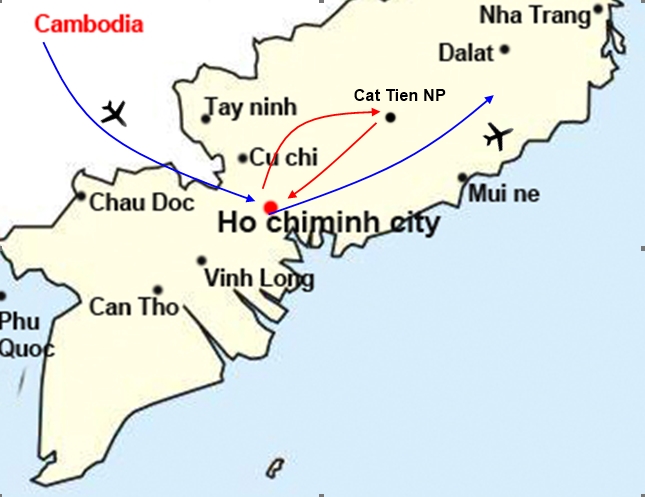 Into The Wild At Cat Tien National Park