A nice combination of culture expedition to Angkor complex and the capital of the country, Phnom Penh helps you have an overview about the country.

Upon your arrival to Siem Reap airport, welcomed by our guide and transfer to hotel for check in. Relax and overnight in Siem Reap.

Breakfast at hotel, explore South Gate of Angkor Thom known as Big Angkor, 3km2 walled and moated royal city and was the last capital of the Angkorian Empire. The famous Bayon Temple was an architectural muddle, in part because it was constructed in a somewhat piecemeal fashion for over a century. Terrace of the Elephants is an impressive, two and a half meter tall, 300 meter long terrace wall adorned with carved elephants and gradual that spans the heart of Angkor Thom in front of Baphuon - huge temple mountain in the heart of Angkor Thom, Royal Palace Area and Phimeanakas - impressive rite and sandstone pyramid. Terrace of the Leper King is at the north end of the Terrace of the Elephants, a double terrace wall with deeply carved nag as, demons and other mythological beings. Last you will visit Ta Prohm temple which is a wonderful combination of human genius and natural beauty.
Afternoon visit Angkor Wat temple, founded by Suryavarman II who reigned Cambodia from 1113 to 1152 and built the five towers in the 12th century to dedicate to the Hindu God Vishnu. The plan of the pyramidal conception of the temple combined with spaces, alleys, ditches is an ancient masterpiece of architectural design and construction. Overnight in Siem Reap.

Breakfast at hotel and check out. Transfer to airport for flight to Phnom Penh, the city retains its traditional Khmer and colonial styles with French villas and large tree-line sidewalk.

Upon your arrival, picked up by tour guide and transfer to check in hotel. Then you will visit the impressive colorful Khmer-style Royal Palace complex built in 1866 by the Predecessors of King Norodom. Nearby is Silver pagoda (the emerald Buddha temple), where contains plenty of Buddha Statues decorated and made by gold, diamond, gemstone and silver. Walk up to sacred hill Phnom Daun Penh – also the name of a pagoda and name of the capital nowadays. Last visit Central Market, a large market constructed in 1937 in the shape of a dome with four arms branching out into vast hallways with countless stalls of goods. Initial design and layouts are from French architect Louis Chauchon. Overnight in Phnom Penh.

Have breakfast at hotel and check out. Free time at leisure until transfer to airport for departure flight. End of services. 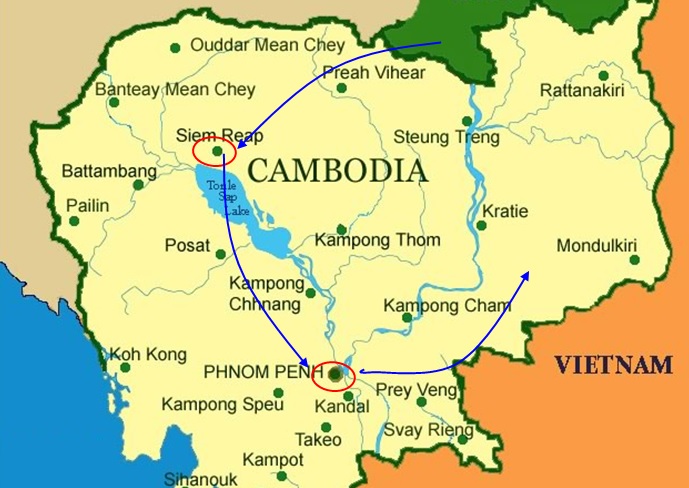