This trip give you an unforgettable feeling of cruising on the Mekong river and enjoy the gentle silence of the ancient palaces.Visit beautiful Khouangsi Waterfall, enjoy the impressive experience with elephant watching.

Welcome to Luang Prabang, perhaps the best-preserved traditional city in Southeast Asia. The tranquility and charm of this town with its splendid natural scenery and cultural sights make it one of the most delightful places to visit in Laos.

After a short rest, we visit the impressive stupa of Wat Visoun and the shrine of Wat Aham, Wat Mai. We then climb up to the top of Mount Phousi for an enjoyable exploration of the sacred, gilded stupa as well as a beautiful sunset view of the city and the Mekong River. From there, we explore the Night Market, where you can find a lovely selection of handmade textiles made by the hilltribe and local people surrounding Luang Prabang. Overnight in Luang Prabang.
Please note: Standard check in time is 14:00. Early check in is subject to availability of the hotel.

After breakfast, we visit The National Museum at the former Royal Palace, which displays a lovely collection of the artifacts reflecting the richness of Lao culture dating from the days of the early kings right through to the last sovereign. Continue to explore some of the major sights in this faboulous city, including the city’s oldest temple of Wat Sene, the magnificent Wat Xiengthong, its exterior architecture is remarkable with decorated guilded stuccoes and doorways, a “tree of life” mosaic pattern set in coloured glass on the back wall and its three tiered roofs sweeping low to the ground representing classical Laotian architecture.
Afternoon we then embark on a cruise upstream on the Mekong River, which also gives us a breathtaking view of the tranquil countryside as well as explore the mysterious Pak Ou Caves, two linked caves crammed with thousands of gold lacquered Buddha statues of various shapes and sizes left by pilgrims.  Along the way, we stop at the village of Ban Xanghai, where they make the local rice wine. On return, we take a short drive to Ban Xangkhong, a village well known for its silk weavings and for its Saa (jute) Papermaking and Ban Phanom, a small village known for its hand weaving. Overnight in Luang Prabang.

An optional early start gives you the fantastic opportunity to participate in the daily morning rituals of saffron-clad monks collecting offerings of Alms (ubiquitous sticky rice) from the faithful residents. This tradition is very unique in Laos, being the only Buddhist nation still preserving the procession.
From there you will visit the morning Phosi Market, where you will see such diverse offerings as dried buffalo skin, local tea and saltpeter among the chickens, vegetables and hill-tribe weavings. Laos is also known for its traditional crafts, and today you will visit local villages of Lao ethnic minority groups at Ban Ouay, Hmong Village, Ban Ou, Laoloum Village and Ban Thapene, Khmu Village, then drive to the beautiful Khouangsi Waterfall where you can cool off with a refreshing swim in the turquoise pools or walk along the forest trails. We return to the city by late afternoon to observe the sunset at Wat Phabath. Overnight in Luang Prabang.

Have breakfast at hotel. Morning pick up by our guide and transfer to Elephant Village Camp. Meet  our camp manager and participate in a short briefing about elephants. Enjoy the impressive experience of a 3 km elephant ride on the elephant’s neck (without How Dah = elephant seat). Then take in a traditional Lao long boat to the Tad Sae Waterfall and relax or swim in the clear water (swim suit recommended). Lunch at Elephant village restaurant. Afternoon, visit local villages and visit Henry Mohout’s grave site.  Mohout, a Frenchman, ‘rediscovered’ Angkor Wat
Please note: Elephant ride without How Dah (elephant’s seat).

Have breakfast at hotel and check out. Free time until transfer to airport for departure flight. End of services. 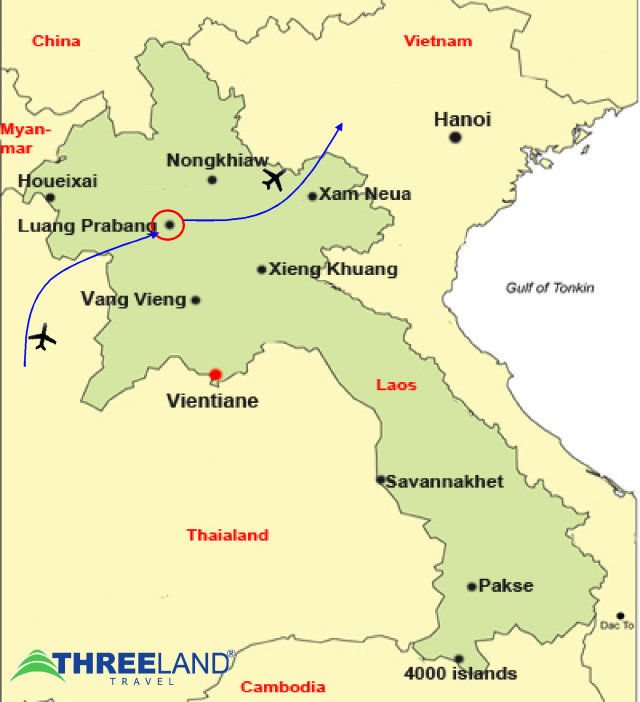