Ho Chi Minh (Saigon) is the largest metropolis in Indochina, and perhaps will be a central transit of Southeast Asia with a new larger airport and worthwhile attractions. The city has a peculiar harmony of charming French architectures, shaded streets, enthralling local markets and modern skyscrapers. Saigon has more religions than any cities in Indochina, from Buddhism, Catholicism, Protestantism, Islam, Hindu to local religions such as "Cao Dai" and "Hoa Hao", thus the city is split into different quarters with distinctive colors and attractions in correspondent with these religions. Within a short time, visitors can choose to discover charming District 1 with theatres, leafy streets and leisurely sidewalk cafés, lose themselves in the fascinating Chinatown, or go climbing up Bitexco Tower for a city panorama and taste flavors from numerous cuisines.

Connected with Cambodia, Thailand, Singapore, Malaysia and Indonesia by short airway, river or land way, Saigon has become the first place for innovation, creativeness and new tour experiments in Vietnam, despite its modern style. Moreover, the city is also becoming a good transit for the best beaches in Asia, including Con Dao and Phu Quoc islands and plages across the Southern coastline. During the last ten years, trips connecting Saigon with East Cambodia by both riverway and landway has positioned Saigon as a center of deluxe Mekong cruise tours, as well as a stopover for many sea cruiser ships. Saigon is establishing itself as a growing destination not only in Vietnam but also in Asia.

During your stay in Ho Chi Minh City, you may opt to try the local cuisine in restaurants or in street vendors. Let blend yourself in the local culture and join people on small vendors, you will definitely be welcomed with a friendly smile. Let check these must-try dishes in advance before you get lost in the heaven of food.

The three components that are crucial for a flavorful bánh bèo are the rice flour base, the toppings and the dipping sauce. Small round-shaped pieces of rice flour base are topped with green onions, crunchy pork rinds as well as shrimp powder are then served with a special dipping sauce. Bánh bèo are usually served in small bowls, with each bowl having a single serving piece. Bánh bèo can be found in cities and provinces across Central and Southern Vietnam as it is a representative cuisine of the two regions.

Bánh canh cua which roughly translate to “crab noodles” is a dish with crab soup and thick noodles, thickened with tapioca flour. It is served with chilies, green onions and fresh lime. Some spots in Ho Chi Minh city have earned its reputation from this dish, such as Hoa Binh Market or Bánh canh cua Út Lệ on To Hien Thanh Street.

Bánh cuốn are fine layers of steamed rice rolled in chopped mushrooms and ground pork, seasoned with pepper, herbs and sweet fish sauce. This dish can be found across the county and usually is served as breakfasts. However, each region modifies the dish to best match its locals’ preferences.

Bánh khọt, a specialty of Southerm Vietnam, consists of a base made of fried rice with a variety of topping options. Fresh herbs are also added to improve both the aesthetics and taste of the dish. The processing the flour is of vital importance while making bánh khọt. Besides, small shrimps are usually found in the toppings; these should retain attractively reddish color as well as ample crunchiness.

Bánh xèo is a crispy and extraordinarily appetizing recipe that is favored across the country. It consists of large thin rice layers that are sizzled to form a shell for the filling of prawns, herbs and different kinds of vegetables. The sauce of this dish varies from region to region, depending on locals’ preference.

Ho Chi Minh City - the largest city in Vietnam is known for its French and Chinese influences as well as its dynamic daily life. The city is often referred to as Saigon, its former name, and has a rich history that is reflected in much of its present-day appearance, where modern skyscrapers stand side by side 19th-century buildings and coffee is favored as much as traditional green tea.

When is the perfect time to visit Ho Chi Minh City?

The tropical climate dominates Southern Vietnam and consists of two primary seasons: dry season (from November to early May) and rainy season (late May to October). The rainfall during June to August often consists of heavy but short-lived rains in the afternoon. Temperatures are high year round (25-35°C/77-95°F). The decision of when to visit Ho Chi Minh City may depend on your desire of southern sunlight and tolerance of southern heat, but travelers often plan their trips for March to April, where the temperature is just right to explore the lavishing city.

Airplane: There are numerous daily international and domestic flights from and to Tan Son Nhat Airport. With Long Thanh airport currently in construction, the prospect of traveling to and from Saigon is even more promising.
Train: Saigon Train Station is the final stop of the North-South route and offers access to other provinces in Southern Vietnam.
Bus: Mien Dong Bus Station and Mien Tay Bus Station in Ho Chi Minh City are important passenger transportation hubs. From here, there are various routes to various other provinces in the region and the country.

Reunification Palace: It now serves as both a well-visited museum and government meeting center. The ending of the fierce Vietnam War in 1975 is marked right at this place. Visitors can access many rooms that are still furnished with original furniture and decoration.
Notre-Dame Cathedral: The Cathedral was built in the late 1880s by French colonists, is one of the few remaining strongholds of Catholicism. It is now one of the most popular tourist spots in Ho Chi Minh City due to its distinct architechture with typical neo-Romanesque features such as the two giant bell towers which are holding six bronze bells, ornate stained glass windows and a red brick facade which were imported from Marseilles and incredibly unique during that time period. The Cathedral still serves as an institution of Catholics in Saigon.
Saigon Central Post Office: is famous for its French Colonial architectural style, located diagonal from the Notre Dame Cathedral. Incidentally, the design comes from world-renowned Gustave Eiffel, the architect of the Eiffel Tower and the Statue of Liberty. The interior embraces impressive beauty and accommodates some souvenir shops for the visitors. The Saigon Central Post Office is open during the week from 7am to 7pm and until 6pm during the weekend.
Thien Hau Temple: is located in Ho Chi Minh's Chinatown. The temple is dedicated to the protector of seafarers, Lady Thien Hau. Although the temple does not look exquisite from the outside, as soon as you get inside, you will immediately be aware of the scent of the incense planted throughout the temple, even hanging from the ceiling.
Dam Sen Cultural Park: is where you can explore all kinds of activities and games. Or you can just relax under a shaded spot and enjoy the cheerful atmosphere all around, it will eliminate all of your stress and worries.
Ben Thanh Market: is one of the popular landmarks of Ho Chi Minh City, where thousands of visitors come to every day to browse and buy products or just to have a stroll,. Here you may find almost everything your heart desires, from clothing, souvenirs, jewelry, to food and popular varieties of Vietnamese coffee.

What to see in Ho Chi Minh’s surrounding area?

Cu Chi Tunnel is a tunnel system where Vietnamese partisans hid during the fierce Vietnam War. The site is located about 70km from the city and is worthy of a day trip. The tunnels originally had a length of 200 kilometers, but most have decayed over time. Today, in memory of the war, you can visit a 90-meter section of the tunnel and see for yourself what it was like during the war.
Mekong River Delta has been widely known as the “rice bowl” of Vietnam thanks to its lush green rice fields and large Mekong River, where bountiful harvest of dozens of millions of tons of rice are produced every year. It is strongly characterized with its lifestyle afloat a densely linked network of rivers, canals and streams.
Tay Ninh Holy See is the headquarter of the Vietnamese religion Cao Daism. Its great temple is dedicated with extraordinary and astonishing architecture, which embraces a blending of a French church, a Chinese temple and an Islam mosque.
Cat Tien National Park is situated about 150km north of Ho Chi Minh City and preserves lowland tropical forests with its diverse flora and fauna species. The park is home to some exotic animals such as the golden-cheeked gibbon, Asian black bear, gaur and a variety of birds and reptiles.

OUR PICK: Two full days in Ho Chi Minh City, staying in the City center, then departing for a two-day trip in Mekong River Delta for cruising, and a two to three-day trip to Phu Quoc Island for sightseeing and relaxation.
Cruise tours: Cruise along Saigon River, breath in the breezy air and enjoy the romantic atmosphere while enjoying dinner with champagne on a wooden boat.
Saigon City tour: Explore the city and its notable landmark as well as the bustling life either on foot, by bike or by motorbike.
Shopping tours: in various local markets as well as huge and modern shopping malls in Ho Chi Minh City
Cultural tours: inclusive of the most astonishing museums, temples and churches of the region as well as historical sites.
M.I.C.E tours theme tours, educational tours, charity tours and meditation tours

Our pick: Go city sightseeing by Italian vespa, or depart for a long cultural tour up North to Hanoi with stopovers at some best beaches in the Central of Vietnam. 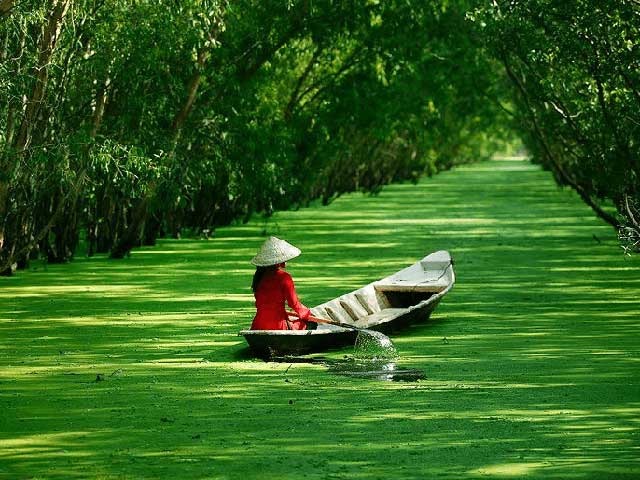 Pleasantly experience with the conscientious services on Vietnam Cambodia Tour with luxury cruise on the flow of the Mekong river and follow excursions through the two countries' top highlights in 15 days. With two-third of time surfing on the surface of the water, your journey passes through the most typical destinations of Vietnam and Cambodia nearby the Mekong River.

Relish the modern and dynamic life of Southern Vietnam under year-round exotically tropical weather. This is a wonderful start to discover the South of Vietnam with Saigon city sightseeing tour to see the most attractive places in the city, then visit Cu Chi tunnels - a treasure of Vietnam’s history. Ending with the Mekong Delta, which we will be going along Mekong mighty river by boats among the canals to visit eco-garden / orchard of Mekong Land and seeing local daily life on the river. 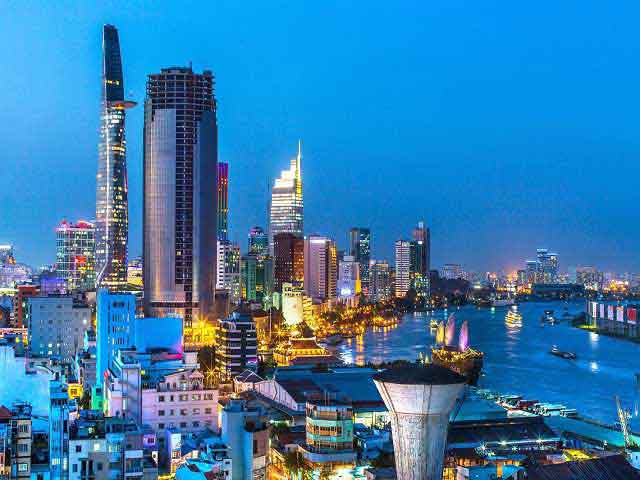 Explore the dynamics of Saigon - a city that is both rich in history and exciting with modern lifestyle. Experiencing the real daily life in the delta.