Lie entirely on the north bank of the Perfume River, Hue Monuments Complex is the highlight of this ancient capital, an "urban masterpiece, a striking example of an Eastern feudal capital” of the Nguyen Dynasty. Be with Threeland Travel, let’s explore its roles as well as its charm in the flow of time, then consult Vietnam tours including Hue. The article below will take you around the Hue Monuments Complex through practical demonstration in advance.

Hue Monuments Complex is situated in Thua Thien Hue province, in the north-central of Vietnam. Since 1802, Nguyen Anh - the first king of the Nguyen Dynasty - had started to construct Hue Imperial City and other architecture to create a solid foundation for national development. In addition to the above works, many temples and shrines were built, which made Hue the center of Buddism for centuries.

Hue Monuments Complex was inscribed as a World Cultural Heritage in 1993 for the outstanding example of an architectural complex illustrating Nguyen’s stage in Vietnam history. It includes 3 main sections in the order of outer large and small: Capital Enclosure, the Imperial Citadel and the Forbidden Citadel. 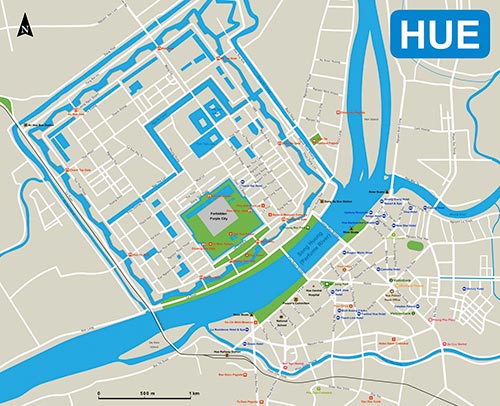 Although the Complex of Hue Monuments has suffered from the effects of 3 wars, modern development as well as expanding human settlements, all the key elements of monumental arts and town planning are well-protected in a boundary and a buffer zone.

In the past, life here is no less bustling and less prosperous than life in other ancient capitals. The longest wall bounds the area where residents live, trade and do daily routines under the protection of the elite army.
Highlights architecture. 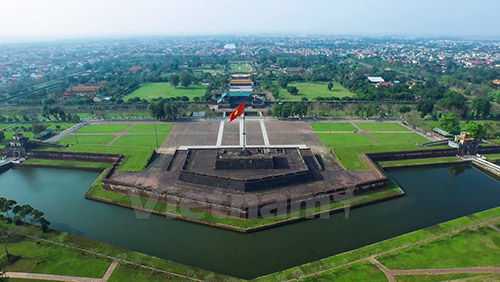 Hue Imperial Citadel is an area located inside Hue Capital Enclosure. This is the place to organize the highest organs of the monarchy and to worship the deceased kings. As the most massive monumental building Vietnam’s dynasties, the construction process of Hue Citadel had last up to 30 years with thousands of people performing a series of jobs such as river filling, ditching, building walls, moving tombs, soiling up to millions of cubic meters, etc.

The Imperial Palace and the entire palace system are arranged on a symmetrical axis, in which the central axis is arranged works for kings only. Buildings in this area are all designed in the harmony of nature with lakes, gardens, stone bridges, islands and perennial trees shading all year round. The interior is usually decorated with the principle in decoration is a poem written on a picture.

Along the sightseeing route, you will catch sight of Ngo Mon gate before entering the working space of kings and feudal officials. Get close to the gate, it is very interesting when you discover the creativity in design, materials and architecture from your expert tour guide.

Ngo Mon Gate is on the south of the capital, towards to Perfume River. It has 5 doors, of which the main gate in the middle is the gate for kings, the two sides are for officials, martial arts, and the two surrounding gates are for soldiers and elephants. 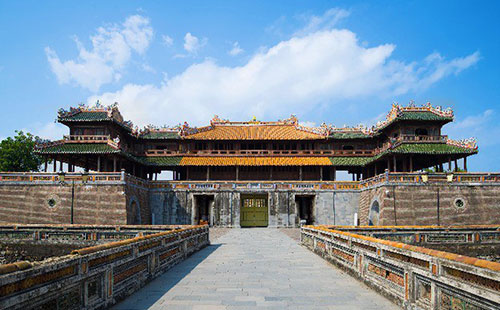 Contemplate Ngo Mon Gate – the masterpiece of the Nguyen's structure

Entering the Forbidden Citadel, you will have a clearer visualization of the daily life of kings and royal court. It is located behind the Thai Hoa Palace, which was built in 1804, the 3rd year of Nguyen Anh’s reign (Gia Long). In the third year of Minh Mang's reign (1822), the king changed its name into Forbidden Purple Citadel.

In the Forbidden City, about 50 architectural structures are divided into many specific ranges for kings, concubines, royal members to entertain, convalesce, enjoy meals and do daily routines.

Besides services included in your Vietnam tour package, it will make your trip more interesting when experiencing these activities.

The menu is extensive with dishes with bold flavors of Hue such as Nem Phung, seafood soup, Grilled chicken with lemon leaves, Nguyet Bieu sticky rice cake, royal rice, etc.
It is such an awesome experience when relishing these dishes in the traditional cultural space. 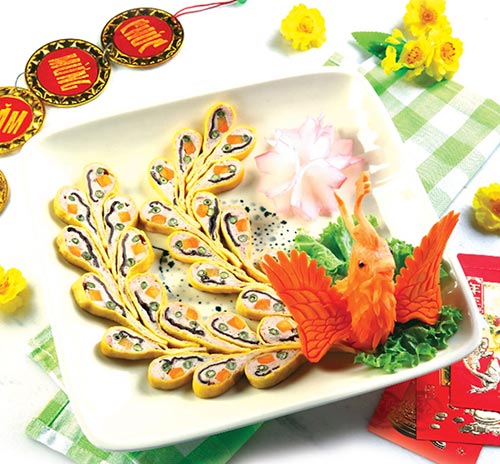 Chả Phượng (Phoenix rolls) – One of the most favorite royal dishes

Hue Monuments Complex provides tour guides for each site or the whole route. Therefore, you can discover this heritage without missing any specific spots.
Price: 150.000 VND for 1 site or 300.000 VND for the whole site.

Electric cars will take you to Complex of Hue monuments as well as other worth-visit attractions in the city.
Contact your local Threeland if you have any inquiries about Hue.

During 9 generations of Nguyen Lords, Phu Xuan (Hue city now) had been chosen to be the center of politics, economics, culture, education and military for Đàng Trong (Inner Land). After unified the country in 1802, Nguyen Anh officially crowned emperor, became the first king of the Nguyen Dynasty and recaptured the capital at Phu Xuan.

Over a long period as a royal land, Hue culture gradually formed its own characteristics that could not be mixed with the attribute of other imperial cities.

The land of the ancient capital has created the people here with an elegant but gentle manner, which not only possess in concubines, royals and nobles but also spread among Hue habitants. That elegant manner is reflected by soft lovely voices and gentle, smooth gait in the purple Ao Dai. Anyone who visits and talks to people here will immediately feel their friendliness and hospitality. 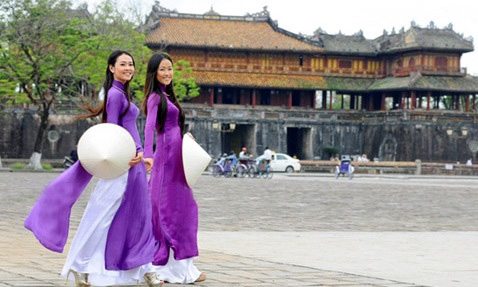 Girls are graceful in the Hue traditional Ao dai

Among the long-standing cultural features of Hue, the sophistication and diversity in processing food contribute a significant part to perceive Hue royal dishes. Although ingredients are picked in the fields, lagoons, mountains and rivers, royal dishes still have succulent, fresh, elegant, sophisticated and artful royal style arrangements.

The folk food is not inferior, either. Nowhere in Vietnam attractions, you will find such cheap but scrumptious fare like these in Hue. The most popular folk dishes are mussel rice, Hue cakes, Hue beef noodles and mixed sweet soup are easily enjoyed near sightseeing sites with tasty flavor.

Thua Thien Hue is in the transition zone between two climate regions, the annual average temperature is 25 ° C. Summer lasts 5 months from April to August, it can reach 40 degrees Celsius so be careful if you are bothered by some diseases like sunburn, high blood pressure, heart disease, etc. On the other hand, from September to December, you should check carefully the weather whether there is a storm or not.

The best time to visit Hue is from January to April, when spring falls, the cold dissipates making room for the sunshine of the new day, the new season and everywhere on the piece. This season coming to Hue, you will see the more beautiful and new image of a lush green city, wafting about the New Year.

The land of Heritages 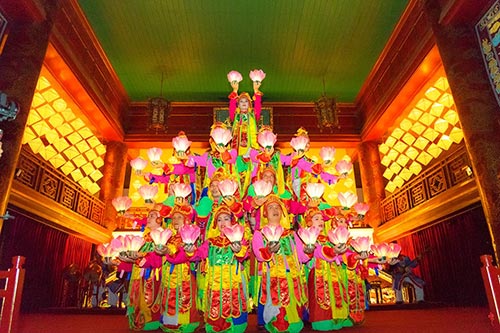 If you are curious about Nguyen’s Dynasty and Vietnam's central culture after your Hue trip, it will be a smart decision to add Danang, Hoian, Tra Que Village and Phong Nha in your Vietnam Holiday Packages.

Some tips while traveling

•    Dress politely (do not wear armor or shorts when visiting places of worship), keep quiet in the palace and sanctuary
•    Filming, taking pictures inside the palaces are not allowed
•    The site does not allow you to smoke in palaces, pine forests and flammable places so remember to ask your tour guide before smoking.
•    People in Hue are very hospitality but the city will become quieter after 10 pm so do not make noise when you pass residential areas.

Hue Complex of Monuments is the highlight destination when you get tours to Vietnam. Besides, to embrace the rhythms of Hue, do not skip experience exciting activities with local. Threelanders are always willing to make your Vietnam holiday packages as wonderful as possible. If you have any inquiries, do not hesitate to contact Threeland at website Threeland.com or email help@threeland.com or via What's app +84342620068 or call +842439262056. Update our activities on facebook Threeland Travel Indochina, Tweeter or Instagram Threeland Travel. 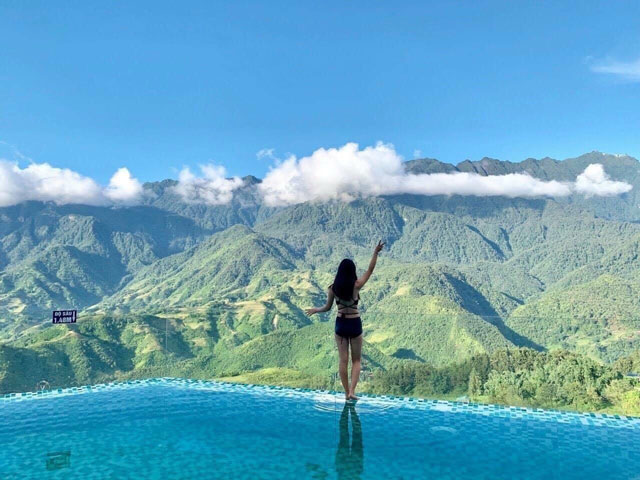 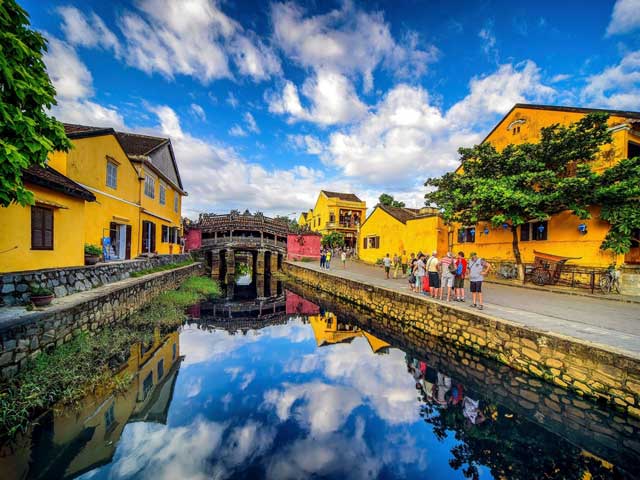 Wonderful one week in Vietnam itinerary: Exploring Northern of Vietnam