Relish the modern and dynamic life of Southern Vietnam under year-round exotically tropical weather. This is a wonderful start to discover the South of Vietnam with Saigon city sightseeing tour to see the most attractive places in the city, then visit Cu Chi tunnels - a treasure of Vietnam’s history. Ending with the Mekong Delta, which we will be going along Mekong mighty river by boats among the canals to visit eco-garden / orchard of Mekong Land and seeing local daily life on the river.

Arrive in Saigon, greeted by your tour guide and transferred to the hotel for refreshing. Afternoon we will start the city tour around 1pm by a walking tour in District 1, the central and commercial district of the city, passing by the Notre Dame Cathedral, the colonial-styled old Post Office, Dong Khoi street, stopover at the City Hall and the Theatre  before visiting the City Museum. If time available, we will go on to the China Town at District 5 and contemplate special ambience and beauty of Thien Hau pagoda before having dinner. Visit the night market at Ben Thanh in the evening. Overnight in Saigon. (Lunch by your own for flexibility).

Please note! The program will be adjusted in accordance with your arrival time.

As we should reach the floating market in Cai Be as early as possible today, try your best to start in Saigon at 07.00am and travel southwest for nearly 3 hours, passing the Mekong Delta, which makes Vietnam the 2ndWorld Rice Exporter, and reach Vinh Long province which is famous for tropical fruits in the Mekong Delta. Upon arrival at Cai Be, board our boat along the market to enjoy trading activities of the peasants of the Mekong Delta, who travel to the market in the boats full of fruits and farming products. Visit family factories and orchards and taste some juicy tropical fruits. Lunch in a charming old-styled house or in a garden house on an island between visits. Back to our car and return to Saigon later afternoon. Overnight in Saigon.

Our day begins with a visit to Tayninh, the centre of Caodaism, a local sect of Buddhism founded by a Vietnamese countryman in early 20th century. The road is thru the typical Southern Vietnam delta. Arriving at noontime, we will have the chance to join the daily ceremony at the temple of Cao Dai called Tayninh Holysee.  In his novel “The Quiet American,” Graham Greene described the temple as the “Walt Disney Fantasia of the East”. The eye over the main entrance and on the inside ceiling is characteristic of every Cao Dai church, and is a reminder of the Creator of the Universe. Yet, the midday mass is very solemn and respectful. Today, the Caodaism numbers over 2 million members, who are vegetarians, obey the rules of chastity, and lead very simple lives helping the sick and the infirm.  They are known for their séances and communications with the spirit world.

On the way back to Saigon is located Cu Chi Tunnels, one of the few remaining monuments to the Vietnam War. Beneath the ground lie 200 km of tunnels, dug by hand and inhabited by the forces of the Vietnamese guerillas during the conflict. At its peak, prior to the Tet Offensive in 1968, the tunnel complex was base to almost 10,000 troops. To this day, it remains one of the most impressive examples of how fierce the war used to be.  Return to Saigon late afternoon. Overnight in Saigon.

It’ll be your own time for relax or shopping in Saigon till your guide see you to transfer to Tan Son Nhat Airport for the departure flight. 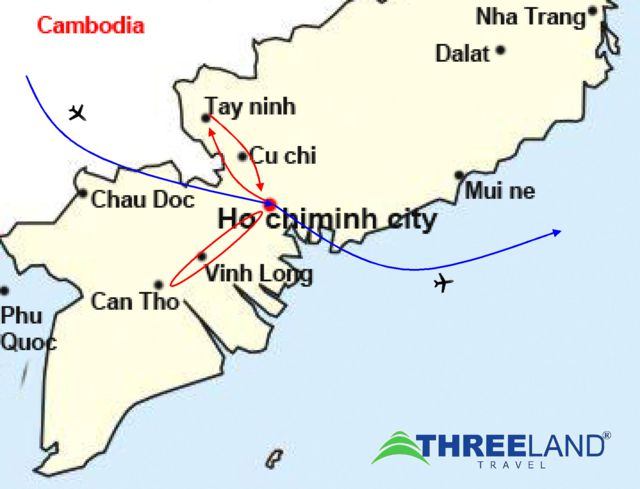