Seek peace and pleasure in a memorable trip to the forest and national park, where you merge with nature and local people. Visit the capital of Laos with dozen of ancient pagodas and amazing cave. Discover the life of local people before spend your time in Na Hin Forest for Bird watching tour. Visit Phnom Penh – the city retains its traditional Khmer and colonial styles with French villas and large tree-line sidewalk. Spend your time at Siem Reap, home of Work's Heritage - Angkor Wat. Discover the south of Vietnam, including the largest areas of lowland tropical forests left in Vietnam Cat Tien National Park with an impressive list of bird species.

Arrival to the Vientiane Capital, you will be met and transferred to your centrally located hotel. Vientiane is a charming and fascinating capital, with an interesting mix of Lao, Thai, Chinese, Vietnamese, French, and American influences. Overnight in Vientiane.

After breakfast, visit the major sights of the capital; including the Wat Sisaket, the oldest temple with thousands of miniature Buddha statues and the former royal temple of Wat Prakeo, which previously housed the famous Emerald Buddha Image. En route to Lao’s national precious heritage, the famous and sacred structure of That Luang Stupa, you will have the opportunity to take some pictures of the imposing Patuxay Monument, which is well known as Vientiane’s own Arc de Triumph.
Early afternoon, drive towards Khammouane province. Along the way we can make several stops to stretch your legs and take some wonderful pictures of the breathtaking scenery of Lao Countryside. Depending on road and traffic conditions, we will arrive at Ban Na Hin, the gateway to Khong Lor Cave, by late afternoon. On arrival we enjoy a short walk around this charming village, enabling us to understand a little more about their culture and lifestyle. Overnight in Ban Na Hin.

After breakfast, get ready for full day excursion with box lunch to Na Hin Forest for Bird watching tour. After familiarizing with the habitats and some general birding to build up a decent species list you can start to target the goodies, not at least the newly discovered 'bald' Bulbul, Limestone Leaf Warbler, Sooty Babbler and Lao Langur in the limestone forest, while the evergreen forest should reveal a host of other specialties; Red-collared and Pale-headed Woodpecker, Red-vented Barbet, Spot-necked Babbler, Long-tailed Broadbill, Spot-bellied Eagle Owl... A full list of birds that have been seen in the area can be found. Overnight in Ba Nahin.

After breakfast, free at leisure in Ba Nahin area, then transfer with box lunch to Vientiane. Overnight in Vientiane

After breakfast, we transfer to airport for your onwards flight to Phnom Penh.
Welcome to Phnom Penh – the city retains its traditional Khmer and colonial styles with French villas and large tree-line sidewalk.
This afternoon, we will visit the impressive colorful Khmer-style royal palace complex build in 1866 by the Predecessors of King Norodom. Nearby is Silver pagoda (the emerald Buddha temple), where contain plenty of Buddha Statues decorated and made by gold, diamond, gemstone and silver. We will stop at Independence monument and explore the National museum; a beautiful Khmer architecture building contains more than 5000 art antiques made by bronze, wood, gold, silver, copper, sandstone and others.
Later on, we will take a cruise to see the sunset on the Mekong and Tonle Sap River in the “Four Arms” section where the Mekong meets the Tonle Sap River before splitting into two branches. Overnight in Phnom Penh.

After breakfast, departure by overland to Kampong Cham, also called "The Garden City" and the main town in the province of that name. You will have a first stop at Skuon Land for a visit at Spider Village. Upon arrival in Kampong Thom, we will have your lunch first before visiting the archaeological sight of Sambor Prei Kuk by national Road#6. Road condition from Siem Reap to Kampong Thom is very good now. Only the road from National road to the temple is a bit rough. Dinner and overnight in Kampong Thom.

Early wake up today, we will depart from the hotel at 04.30 AM to meet our bird watching guide and driver in Chi Kreng district. We will stop somewhere on the way for the breakfast. Transfer by 4WD to Stung District located in Kampong Thom province.
Get off the National Road No.6 for a few more kilometers before reaching the grasslands area to search for the critically-endangered Bengal Florican (10% possibility of seeing). Raptors including Eastern Marsh Harrier, Pied Harrier and Greater Spotted Eagle are often seen cruising over the grasslands here. We might be able to see Manchurian Reed Warbler and Oriental Plover also. Enjoy packed lunch. On the way back, visit Kampong Kdei Old Bridge on Angkor Ancient road. Then drop in hotel Siem Reap for check in hotel. Welcome buffet dinner with Apsara Dance Show at local restaurant. Overnight in Siem Reap.

After breakfast, explore South Gate of Angkor Thom known as Big Angkor, 3km2 walled and moated royal city and was the last capital of the Angkorian Empire, The famous Bayon Temple was an architectural muddle, in part because it was constructed in a somewhat piecemeal fashion for over a century. Terrace of the Elephants is an impressive, two and a half meter tall, 300 meter long terrace wall adorned with carved elephants and gradual that spans the heart of Angkor Thom in front of Baphuon - huge temple mountain in the heart of Angkor Thom, Royal Palace Area and Phimeanakas - impressive rite and sandstone pyramid. Terrace of the Leper King is at the north end of the Terrace of the Elephants, a double terrace wall with deeply carved nag as, demons and other mythological beings. Last visit Ta Prohm temple which is a wonderful combination of human genius and natural beauty. Giant trees have grown here for centuries.
Afternoon visit Angkor Wat temple, the founder of the temple was Suryavarman II who reigned Cambodia from 1113 to 1152 and built the five towers in the 12th century to dedicate to the Hindu God Vishnu. The plan of the pyramidal conception of the temple combined with spaces, alleys, ditches is an ancient masterpiece of architectural design and construction. It is time to view the lovely sunset from Pre Rup temple. Overnight in Siem Reap.

After breakfast, star to enjoy an excursion by a boat, an outboard motor powered sampan to Prek Toal. There we will explore a wild bird sanctuary, the flooded forest and floating villages. During the boat trip we have chances to observe different fishing methods on the river and see how local people live and earn their livelihood on the river. Enjoy packed lunch. Return to Siem Reap for overnight.

Today pick up early from hotel to Ang Trapaeng Thmor at 05.30AM, packed breakfast is prepared for you. On the way we will stop somewhere on the way for short birding and having breakfast before arrive to the WCS office at ATT pick up ranger. Later start birding around Ang Trapaeng Thmor. Enjoy lunch at WCS office.
In the afternoon we leave WCS office and visit the local village’s silk weavers, who will sell their wares directly to you. After tour, travel back to Siem Reap, free at leisure rest of the day. Overnight in Siem Reap.

After breakfast, free leisure on own arrangement until transferring to airport for flight onwards.
Upon arrival in Saigon, transferred to your hotel to drop off your luggage and at leisure in the rest of the day. Overnight in Saigon.

After breakfast, let’s commence our visit Notre Dame Cathedral and Saigon Central Post Office, from where we can walk up to visit the historical Reunification Palace. Afternoon, we will drive overland to Cu Chi Tunnels, an incredible underground network constructed by Vietnamese guerrillas to protect the region against the American attacks during the Vietnam War. We can even crawl a part inside the tunnel, visit their infirmary, kitchen.... to discover how people had survived hereby. Back to Saigon for overnight.

After breakfast and check out at hotel our tour guide will pick up and depart by car from Saigon to Cat Tien national park. The terrain rises up gradually via volcanic area. On arrival, we cross Dong Nai River to the park center and begin your wildlife experience. Check in room at the park center.
Cat Tien is blessed with fantastic birds including green peafowl, orange-necked partridge, Siamese fireback pheasant, and numerous hornbills, broadbills, and babblers. This afternoon, go on a three-hour trek through the Reserved Core Area where you will see many trees of different species that are hundreds years old. Then return to the center for dinner.
In the evening, jeep transfer to TaLai buffer zone for animal spotting (view animals at night).

Wake up to the uplifting songs of the native birds. After breakfast, Jeep transfer 10km inside the park to junction where we turn off the main route and trek 5km to Crocodile lake station. Along the route, if we are lucky, we could see primates and fantastic birds such as Germain’s peacock-pheasant, bar-bellied pitta, orange-breasted trogon and red-and-black broadbill. We might also see gliding lizards along this trail as they cling to tree trunks and extend their dewlaps in territorial displays.
Short break at the lake watch tower. Then trek back to the main route. Jeep pick up, transfer back to the center. Check out.
Leave Cat Tien park. Ferry crossing the river. Transfer by car to Saigon for overnight.

After breakfast, heading to the airport for your departure flight. End of service. 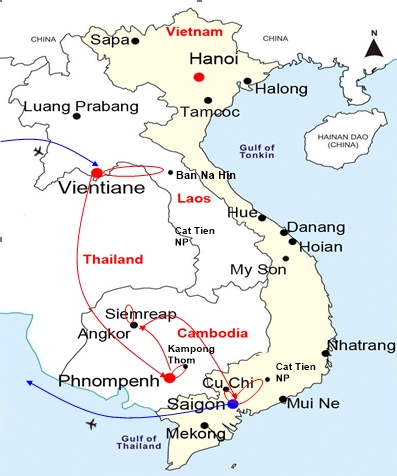