Christmas is definitely the most important festival in Christianity celebrating the birth of Jesus Christ, who Christians believe is the Son of God. Christmas Holiday often starts from Christmas Eve, 24th December to until 5th January, combined with New Year’s Day making it a nearly 2-week long holiday depending on countries. Therefore, long haul trip is preferred, especially for sun-seekers to warmer countries, and Vietnam is among the favorite of travelers around the world. 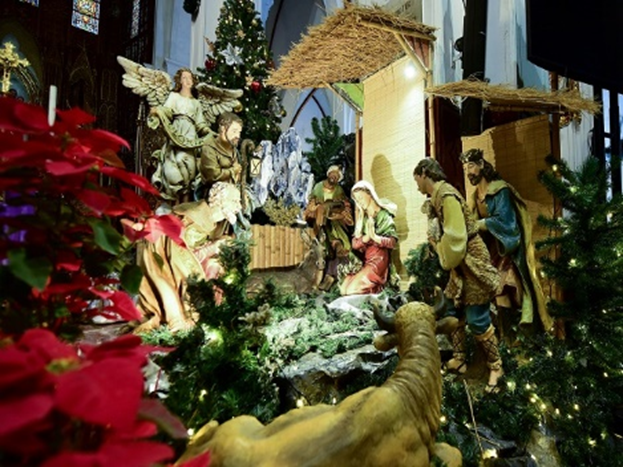 Christianity was first introduced to Vietnam in the 16th century and established a position in Vietnamese society since the 19th century when the French came. The Christian population is around seven percent of total population of Vietnam, though, the density of population is not very high as they live together in specific region. Because of that, Christmas is not a public holiday in Vietnam. However, it has become a very popular festival, especially in big cities such as Hanoi, Saigon, Danang and in Christian densely populated provinces like Nam Dinh.

In fact, Christmas Eve is considered to be more important than Christmas Day in Vietnam that you will find all main activities held on Christmas’ Eve. A few weeks before Christmas, city main streets and shops are decorated in red-white-green and sparkly gold Christmas decors. Hotels, office buildings or shopping malls place a Christmas tree in the center and adorn it with sparkling ornaments, Santa and his reindeer figures, among numerous gift boxes. 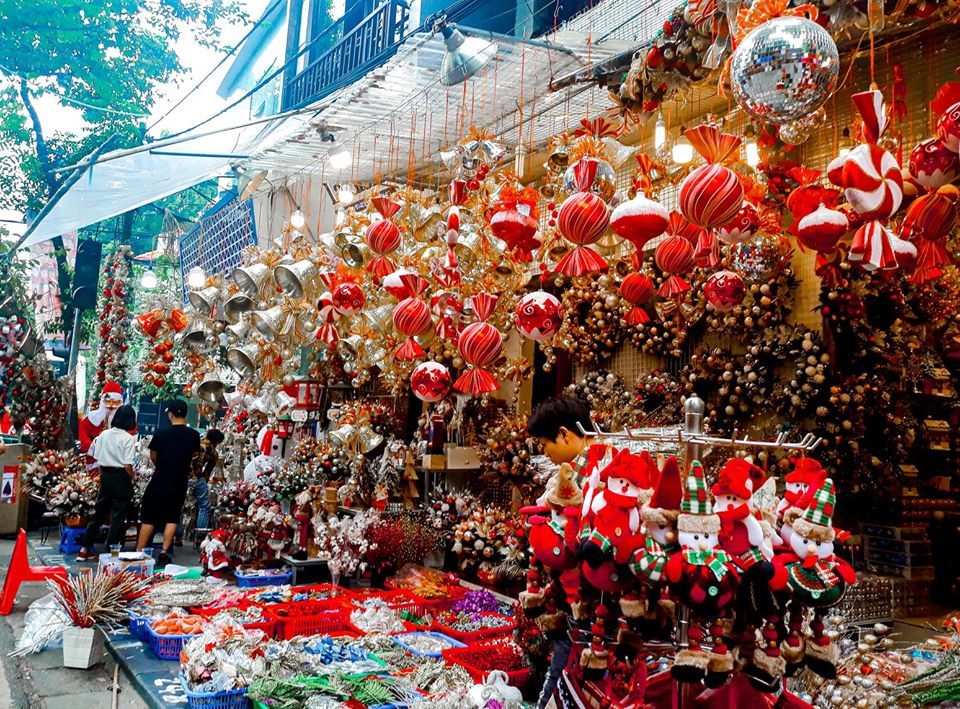 During Christmas occasion, many shops and restaurants offer special promotion campaign such as sale off or give away to promote shopping. You can take advantage of this chance to buy Vietnamese Christmas gifts for your family and friends, or a present for yourself. 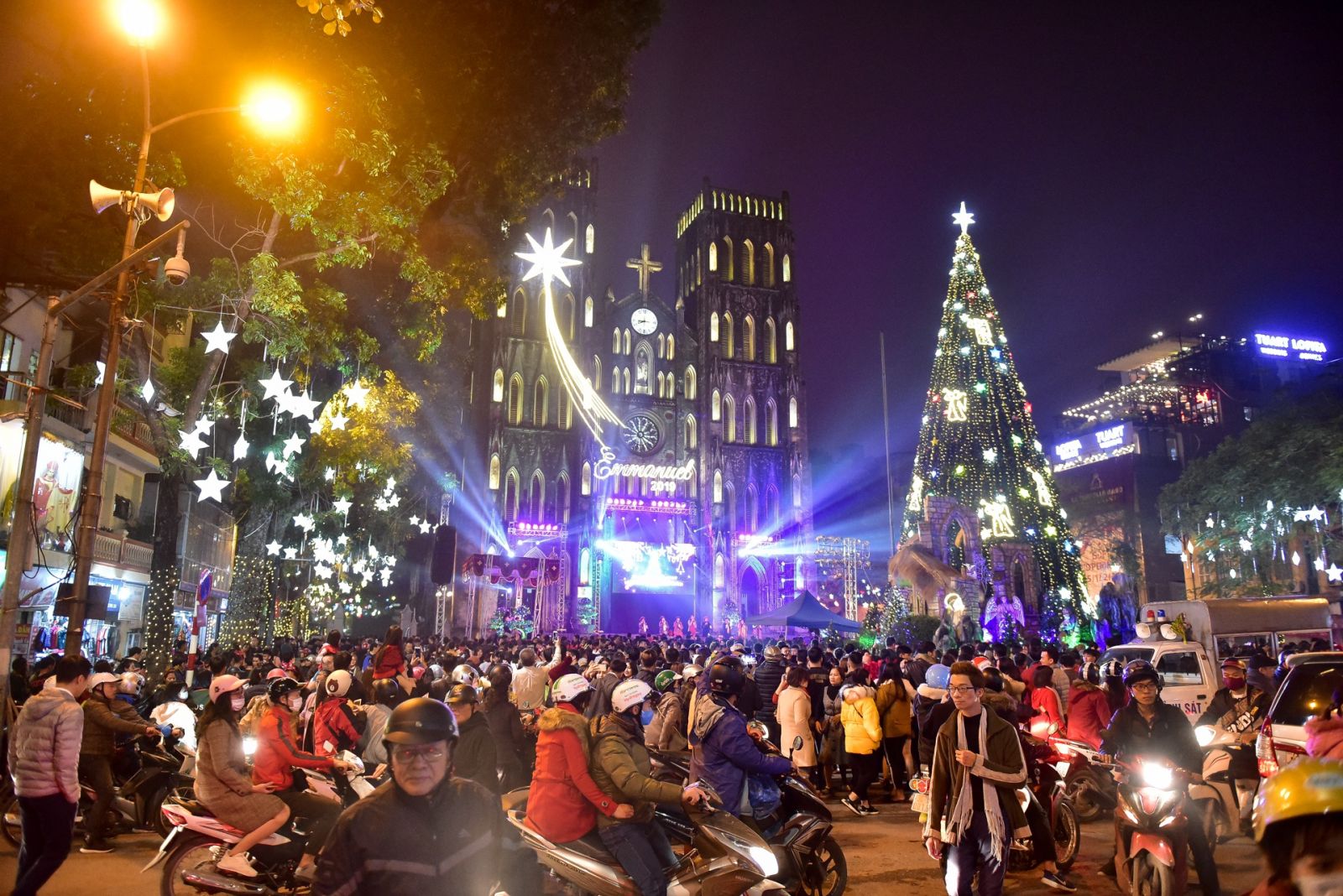 And when the ceremony is over, everyone goes to the city center where music shows held for Christmas. That is why it could become extremely crowded at the central hubs in big cities during Christmas’s Eve. Advice for you is hanging out early and finding a good seat at a restaurant or a pub/bar before the locals occupy all the streets and eating/drinking places at night. 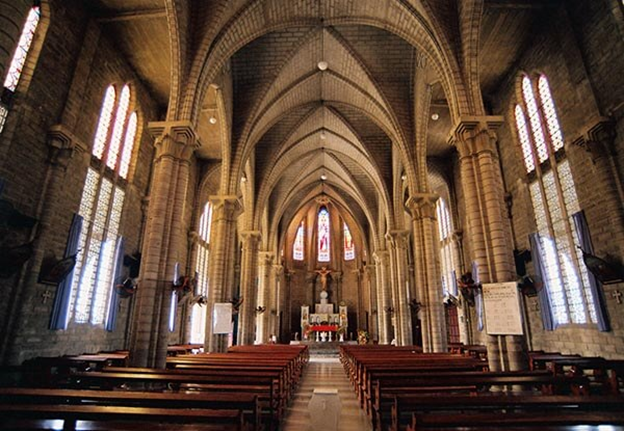 You can easily find Christian churches nearly everywhere in Vietnam to attend Christmas mass or simply to visit during you holidays in Vietnam. Many churches are popular tourist attractions, but some still in function and people go to the church every Sunday just like every other Christian. The country’s church architecture is French colonial styles paired with traditional Oriental designs, resulting in an elegant combination of antiquity and modernity. Check out the most awe-inspiring churches at Christmas you should visit throughout your Vietnam tour! 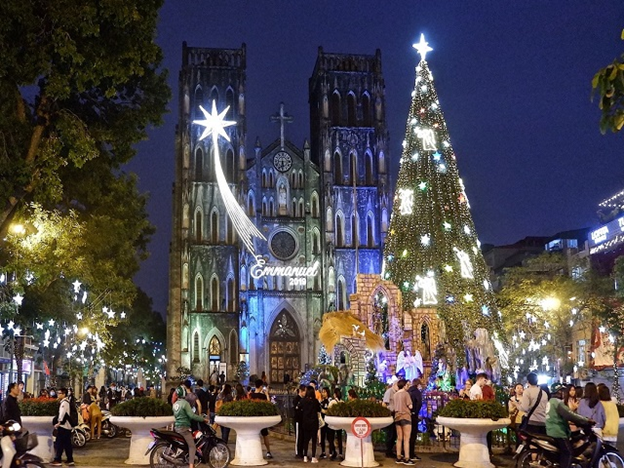 St. Joseph’s Cathedral, commonly known as Hanoi’s Big Church, is the oldest church in Hanoi, with construction beginning in 1886 and the design intending to emulate its Parisian counterpart (Notre-Dame de Paris). Located very close to the Old Quarters, the church serves as the cathedral of the Roman Catholic Archdiocese of Hanoi for the nearly four million Catholics in the country.

The cathedral was built in Gothic Revival-style, the majestic structure consists of granite slabs and gorgeous stained glass windows shipped from France. The dark grey exterior was faded throughout the years, giving the church a rustic and impressive appearance even from afar. St. Joseph’s holds mass several times per day, with each mass broadcast outdoors to anyone unable to enter, which leads to regular to large crowds during mass times. On Sundays, the church is really crowded with people, both tourists and locals as it is a prime tourist attraction and popular spot for photography.

This is the place you should visit before Christmas Eve’s if you are in Hanoi, because it will be super crowded and nearly impossible to get in on that night. But do check out because decorations around the church are comparable to churches in Christian countries, the tree there is huge and there are even two big LED outdoor screens. Also, please note that there are only Vietnamese and French masses in St. Joseph’s Cathedral. For English mass, you could attend at Cua Bac Church – a gorgeous, eclectic church in Hanoi resulted from Art Deco-inspired features combined with Vietnamese roof tiles and surrounding greenery. 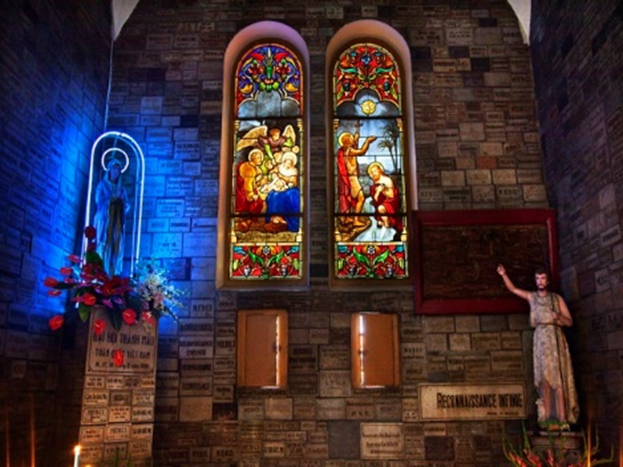 Notre Dame Cathedral Basilica of Saigon is among the top architectural attractions in Vietnam and one of the country’s oldest churches. A tour to Saigon would be incomplete without a glance at this signature construction. A combination of Romanian and Gothic style architecture, the cathedral construction starts in 1877 and completed three years later. The red bricks adorning the facade were shipped to Saigon from Marseilles, garnering a lot of attention from the locals as they were unique at the time.

The cathedral has the capacity of 1,200 people and is adorned with an impressive total of 52 stained glass window pictures. This icon of Saigon offers a note of calm and ancient grace that is in striking contrast to the intense hustle of the city. However, it is now under a massive renovation which is expected to be finished by 2023, so you cannot take any tours inside the cathedral.

In order to attend the midnight mass on Christmas Eve, visitors will have to get the ticket by going to previous masses. Though, you can go on Christmas morning without ticket requirement, which starts at 9a.m. Listen to the beautiful choir and experience the atmosphere with people that come from all over the world, surely it will be a church service you cannot forget. 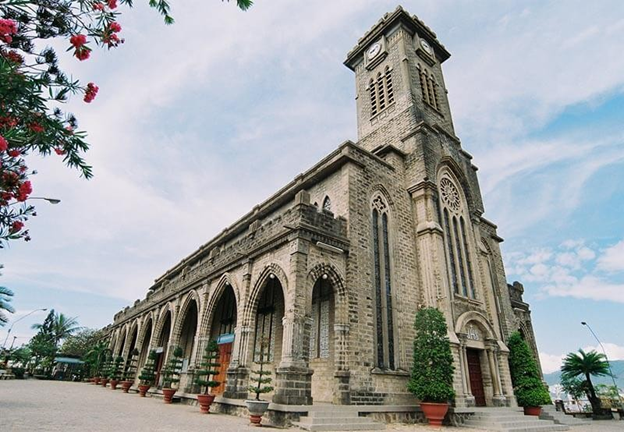 Whilst the two mentioned are too famous and often overcrowded with visitors, the beautiful coastal city Nha Trang offers a less well-known and underrated Christ the King Cathedral. This majestic cathedral was built in 1928 and officially established in 1941, since then it is a marvel to behold. Located in the upper part of Nha Trang so do expect a short climb, Christ the King Cathedral features a striking exterior that will take your breath away.

In fact, due to the mountainous terrain that it was constructed on, people had to use up to 500 mines to flatten the surface. With wide, curved domes, rose doors and a remarkable amount of stained glass windows depicting Catholic saints, the medieval interior would give you an ancient and solemn yet pleasant atmosphere. Because the cathedral was entirely built from rocks, it is commonly referred to as the Mountain Cathedral or Rock Cathedral by the local, so make sure to mention the nicknames when you ask locals to find the church.

Inevitably, churches tend to get crowded on those days, but it will be a great experience to make your Christmas holidays in Vietnam feel just like home. 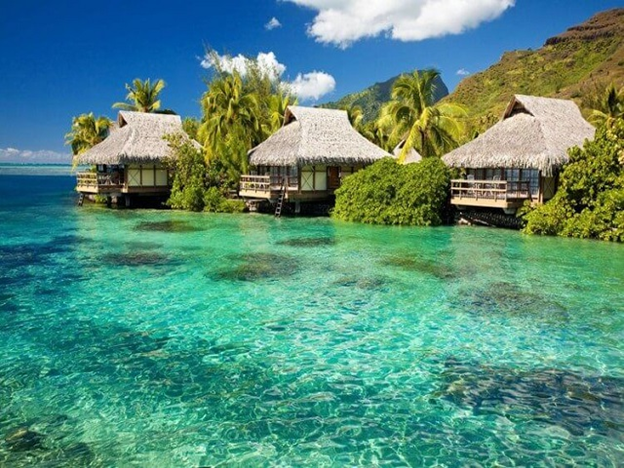 Besides churches and Christmas festive activities, you cannot miss out on Vietnam spectacular coastlines and breathtaking mountain ranges. Have a luxury stay in some of the most beautiful beach resorts in Danang, Nha Trang, Mui Ne or Phu Quoc; or explore local lives by home-staying in mountainous villages in Sapa and Ha Giang.

December is sure to be ideal time to visit most of the places in Vietnam, the month when you can enjoy everything that the country has to offer. So go ahead and book the Best tours in Vietnam with Threeland Travel, or send us your inquiry directly through email help@threeland.com for tailor-made Vietnam holidays! 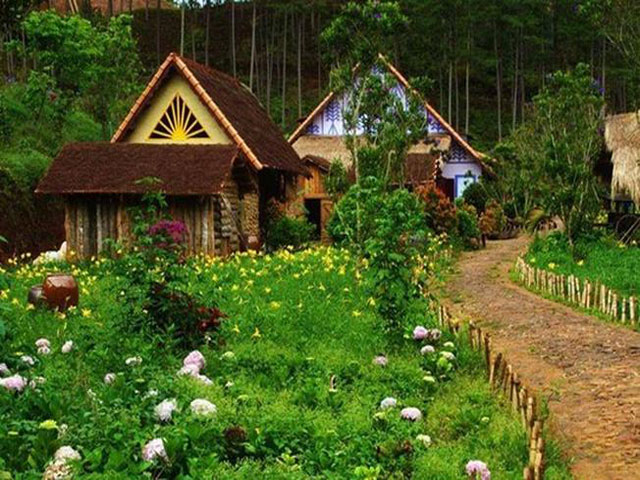 What to do in Dalat on rainy days? 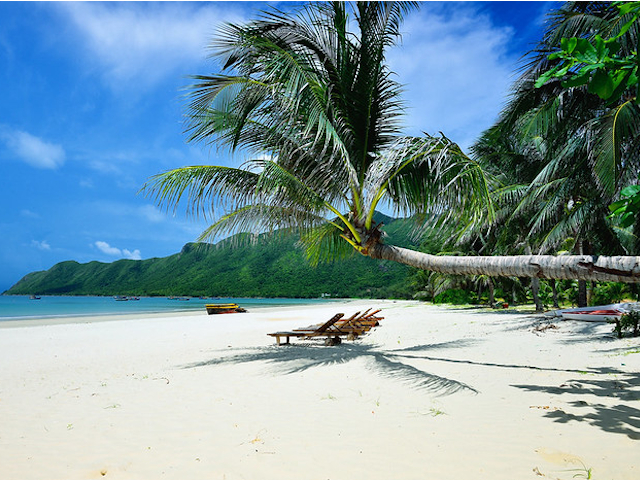 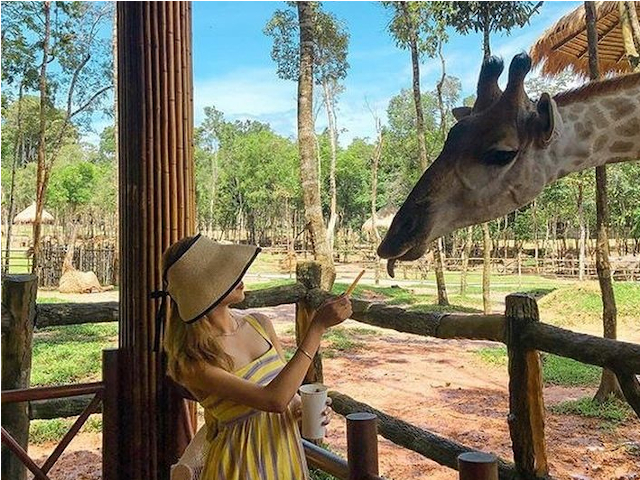