Central Vietnam has many destinations that appeal to domestic and foreign tourists. Among them, Hue is a beautiful, gentle, lyrical land that captures the hearts of many travelers. Hue - a dreamy city, never old, never boring with tourists. What is Hue that makes people so fascinated?

The ancient capital city is the place to keep a lot of national literary and historical values. Hue has many beautiful destinations. Hue is also famous for its many famous specialties. So if you want to have a Vietnam tour, make a plan to explore the dreamland of Hue. 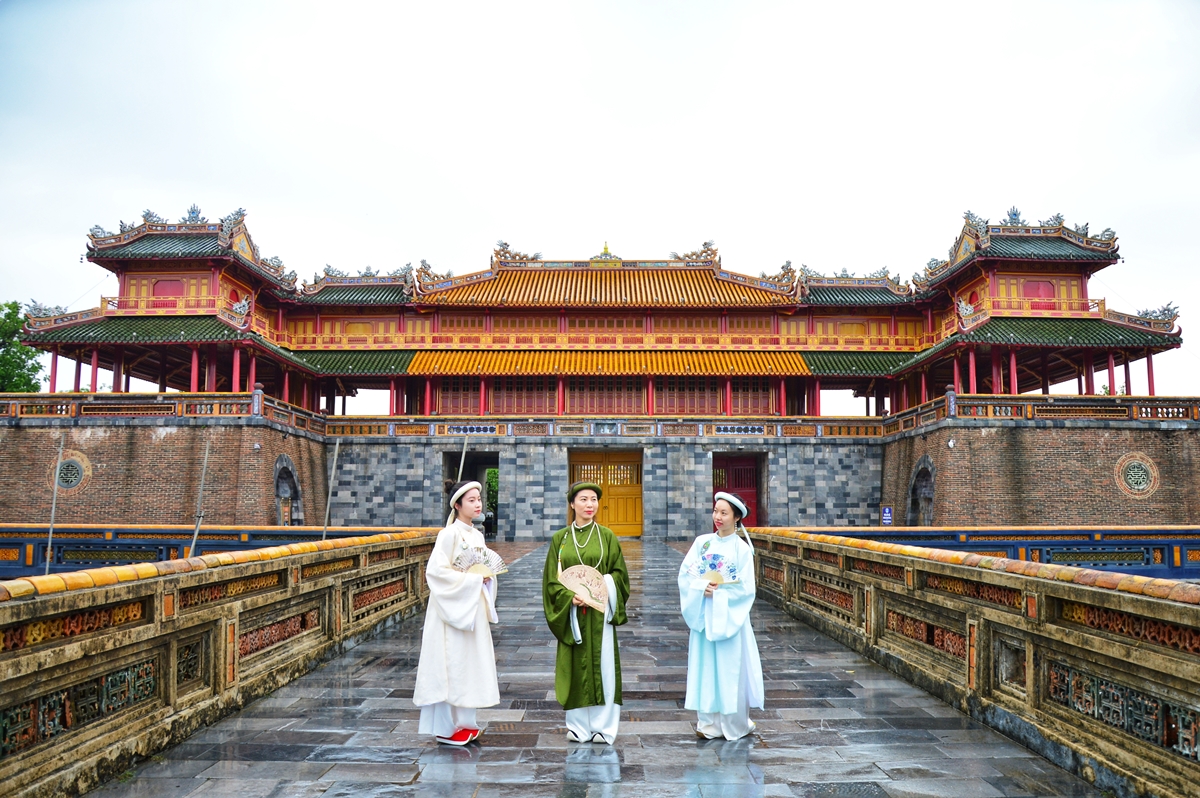 What To Do In Hue If We Have Only 1 Day?

The first destination in the journey to go sightseeing Hue is The Imperial City of Hue. This is a beautiful check-in spot in Hue that visitors cannot skip when visiting this ancient capital. The Nguyen Dynasty's Citadel appeared magnificent, marking many historical traces of Vietnam's last feudal dynasty. 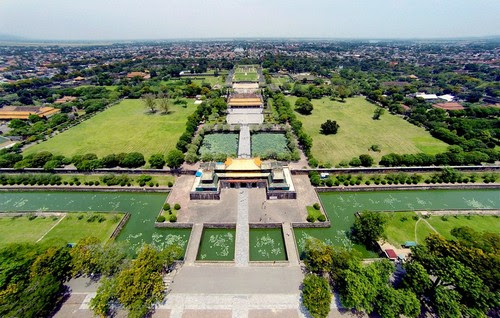 Panoramic view of Hue city from above

The Imperial City Of Hue was built in the early 19th century and lasted for 30 years. Up to now, three centuries have passed, the work still intact the magnificent royal architecture.

The city's beauty is reflected in many categories such as Ngo Mon Gate, Thai Hoa Palace, Ky Dai, etc. Each destination in the Hue Imperial citadel complex exudes its own beauty. It is an ancient, peaceful, and gentle feature reflected through each wall, wooden beams, pillar, tile roof to the doorway.

2. Explore 5 destinations to visit in The Imperial City Of Hue

Gate Ngo Mon Gate is the main gate of the Imperial Citadel. This is a complex architecture, majestic as a magnificent castle. However, it is fairly close, in harmony with the natural landscape and soul, love of the Hue. 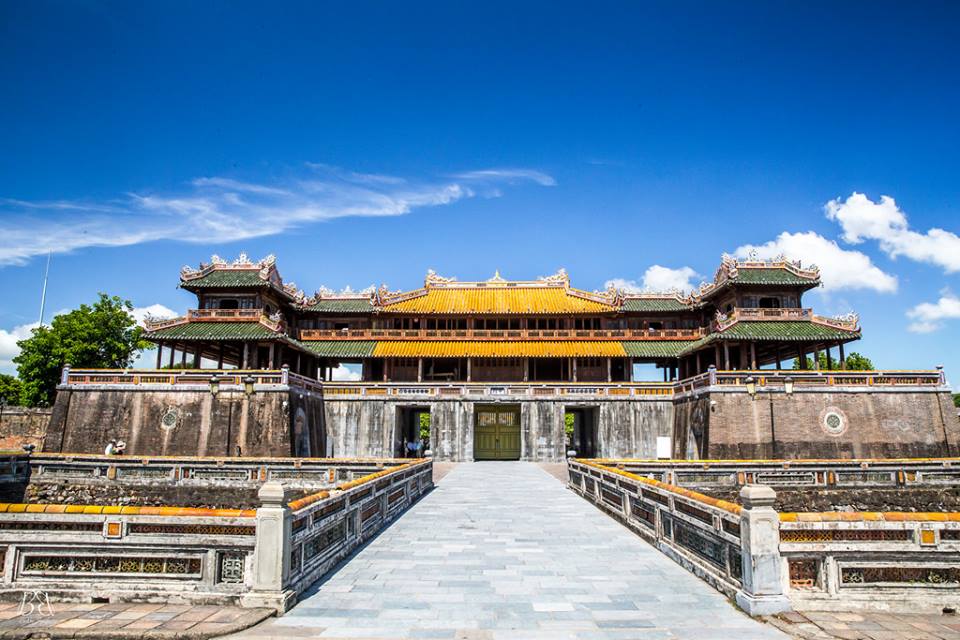 Above the gate is Five Phoenix Pavilion (Lau Ngu Phung) is an open space. In any weather, the inside Lau Ngu Phung has a pleasant and cool feeling. This is also an open space for tourists with a wide-eye view of the four directions to feel the imprint of Hue's cultural history. Besides the carvings or the imperial gate architecture of the Lau Ngu Phung, here you can also see the entire Imperial Citadel.

Thai Hoa Palace was the coronation place of King Nguyen Dynasty. This is considered the center of Hue city and the center of the country as well. The palace, along with the courtyard, was the site used for significant court rituals such as anniversaries and coronations. 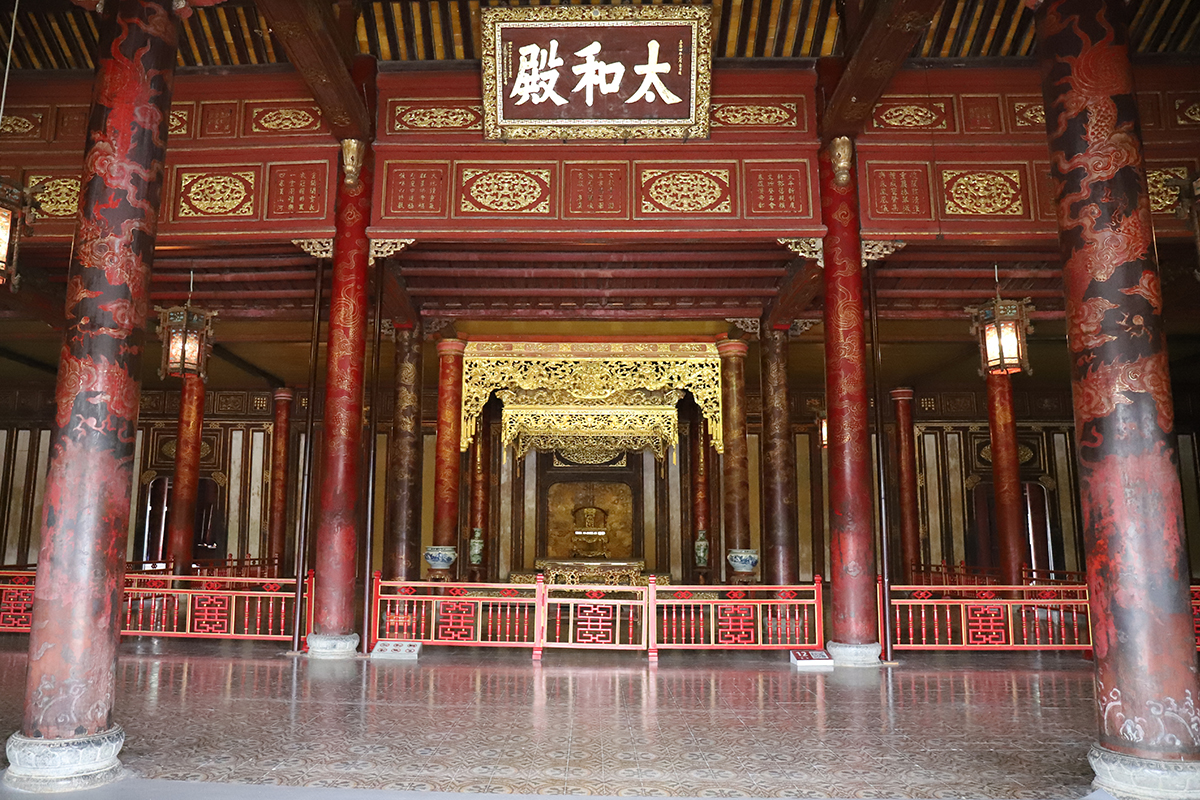 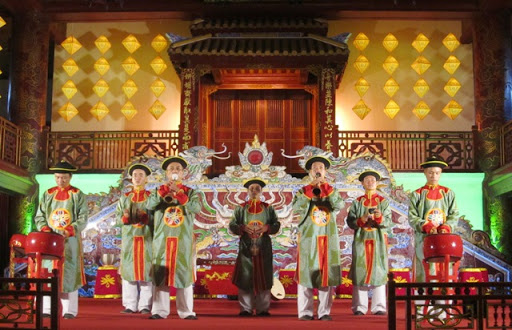 Duyet Thi Duong, located inside Hue Imperial City, is a theater for the king, the prince of the country, and the great dignitaries of Hue to enjoy the performance of Tuong. This is the oldest theater in Vietnam. Duyet Thi Duong has been restored and put into operation with elegant performances of Hue royal music to serve very attractive tourists.

Ky Dai - The central symbol of the ancient capital of Hue 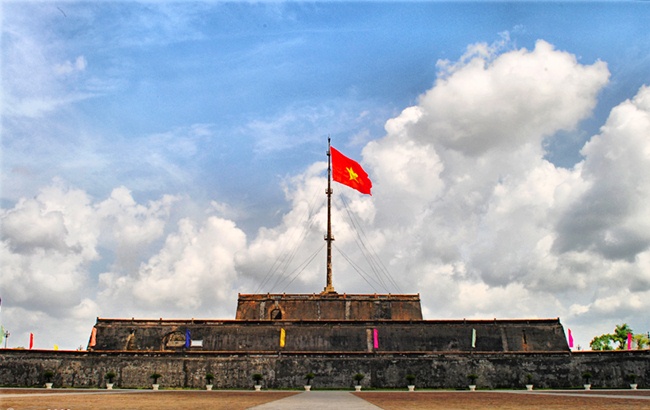 Ky Dai is located in the middle of the south side of Hue city within the Nam Chanh fortress, which is also the place where the imperial flag is flown. The monument has a relatively large architecture, including the flag station and the flagpole. Brick-built radio, consisting of 3 floors, like 3 dead-end towers stacked on top of each other.
Bao Vinh - The secret old town between the Hue city

Bao Vinh ancient town is located on a poetic river 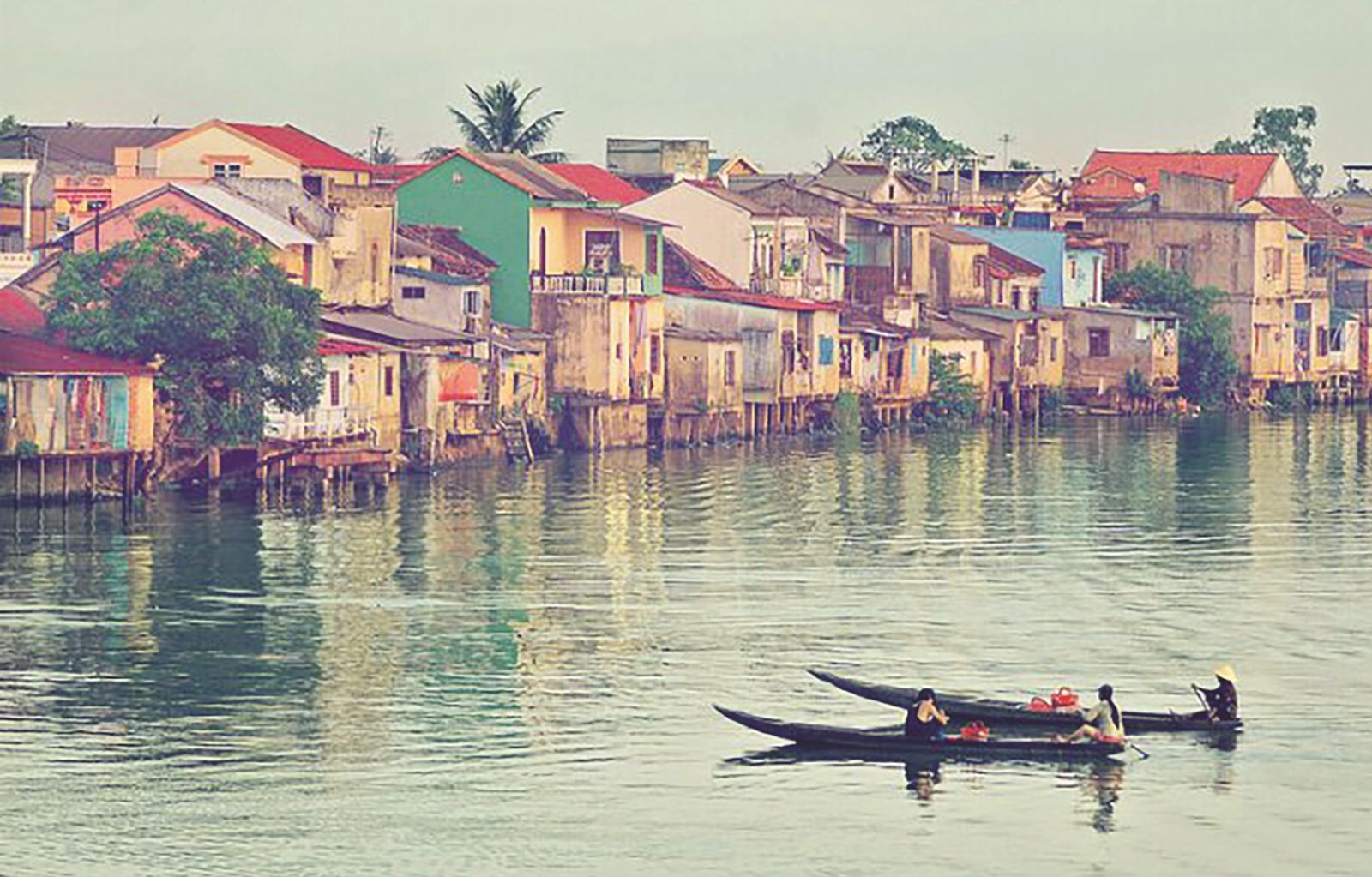 Bao Vinh was used to be the busiest commercial area not only of Hue city but also of Dang Trong from the middle of the seventeenth century to the nineteenth century. Up to now, there are only 15 ancient houses scattered around the peaceful river, bringing a sense of peace to visitors.

Hue is famous for the traditional craft village of making incense for a long time. Thuy Xuan incense village is located on Huyen Tran Cong Chua Street, about 7km from the city center. Here you will learn the stages of making handmade incense of the people here. Visitors are also instructed to make their own, beautiful incense sticks. 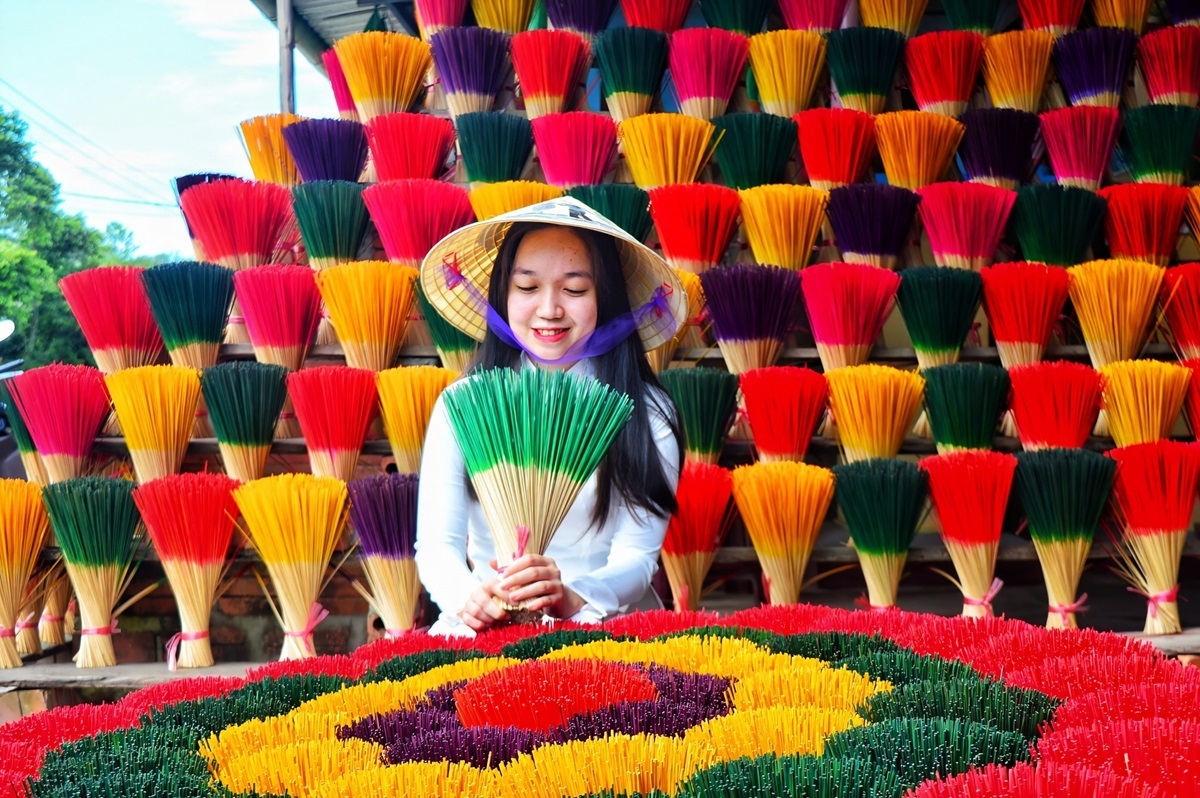 Stepping into the village head, you will smell a pleasant faint scent. When going inside, visitors will encounter colorful scents such as yellow, red, blue, purple, etc extremely eye-catching. Not only a peaceful and tranquil place, but this place also has beautiful check-in corners.

Huong River is one of the 5 most attractive destinations in Vietnam (voted by the Vietnam record association). The poetic Huong River is considered a symbol of Hue. Here you can sit on a boat to enjoy the peaceful scenery, especially at night, you can listen to folk songs, watch the city shimmering with lights, you will feel like you are living in the imperial era. 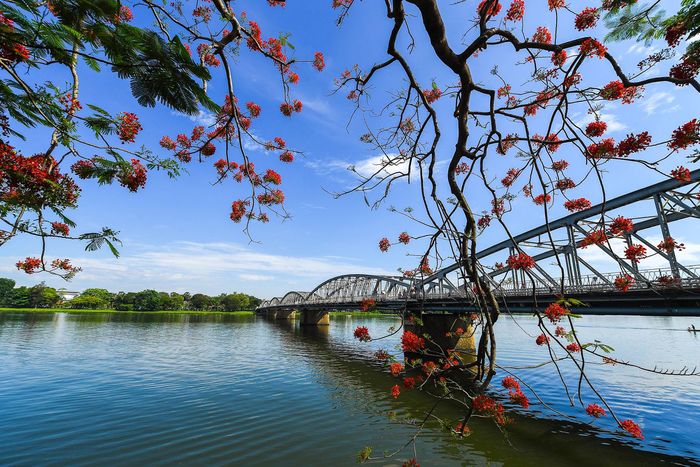 Crossing the romantic Perfume River, Trang Tien Bridge is more than 100 years old, with unique architecture, associated with the development history of this land, making it a symbol and self-esteem for a long time for most of the people of Hue. Trang Tien Bridge is simple, gentle, ancient reflecting on the Perfume River has made many people fascinated when contemplating this beauty. 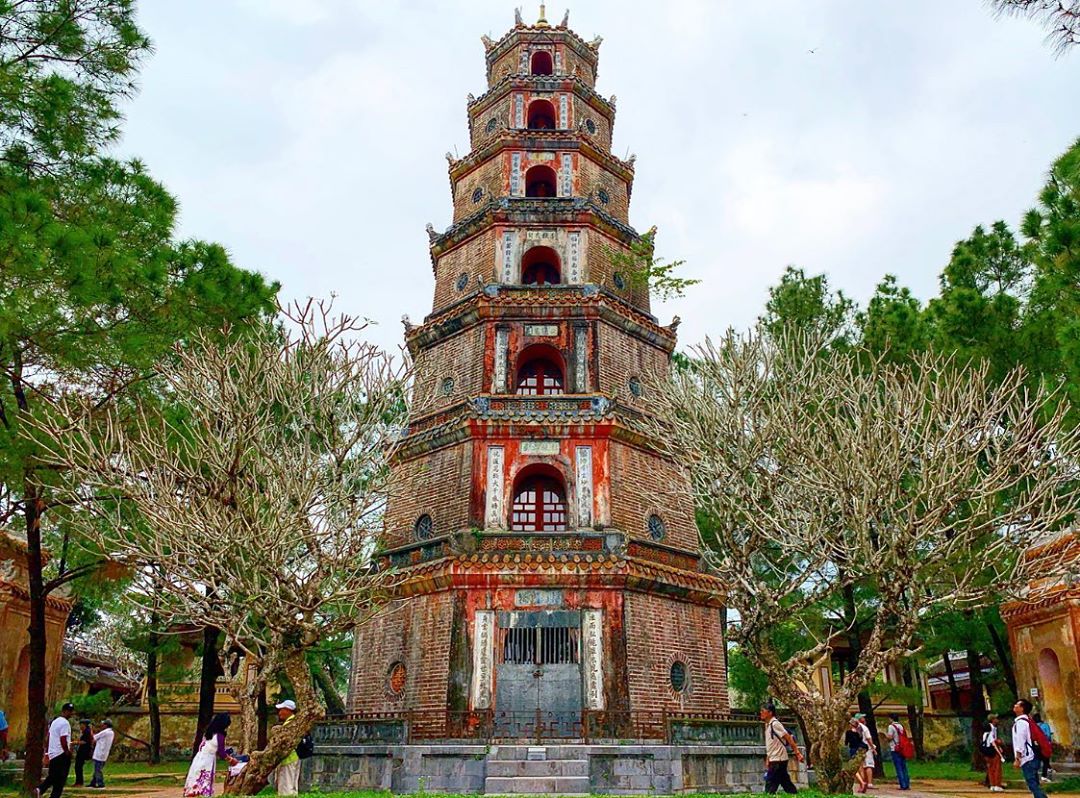 Located on the banks of the romantic Perfume River, Thien Mu Pagoda with ancient architecture is a spiritual destination that everyone who comes to Hue and Huong River wants to visit. The pagoda sits peacefully in the poetic natural scenery, making the hearts of faraway visitors to Hue a longing and nostalgic grief.

If you have set foot in the ancient capital, do not forget to take a photo with the ao dai and conical hats. This will be the best experience when visiting Vietnam. 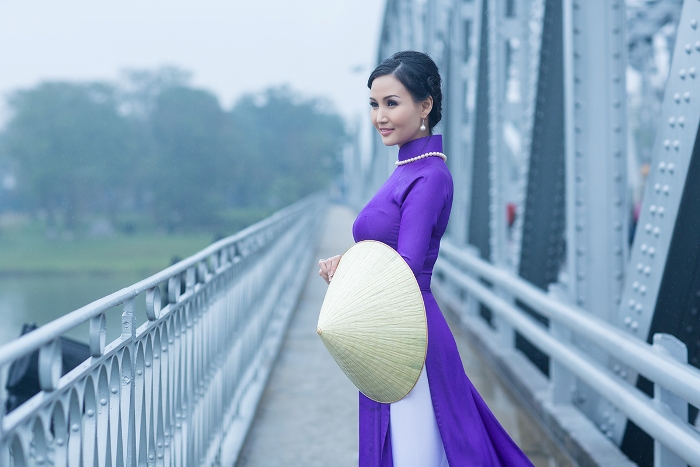 Hue is a familiar destination but never boring in Vietnam. Coming to Hue this summer, in addition to historic destinations, visitors can enjoy a refreshing bath at the famous Lang Co beach, walk in the ancient town, or enjoy unforgettable dishes, .... Get in touch with Threeland Travel to have a great Vietnam tour including Hue tour from Danang or Hoian in this summer vacation. 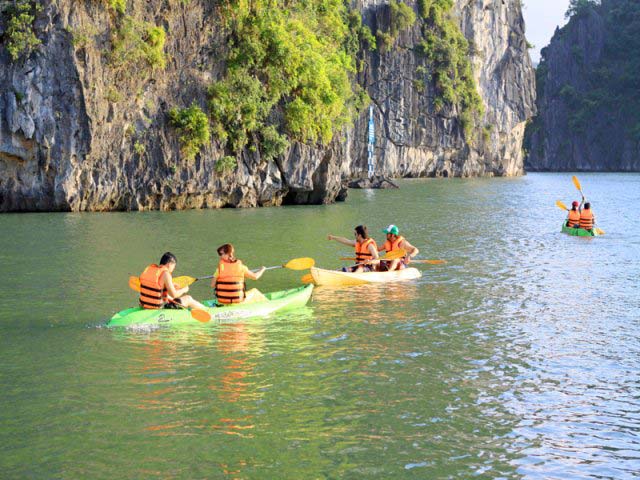 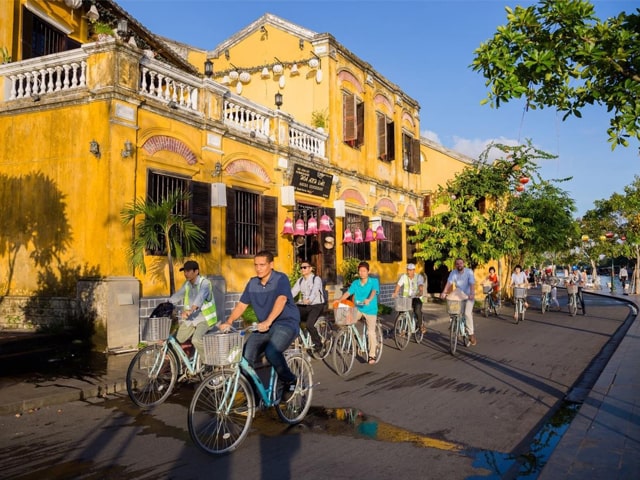 How much it will cost to Vietnam tour from the UK? 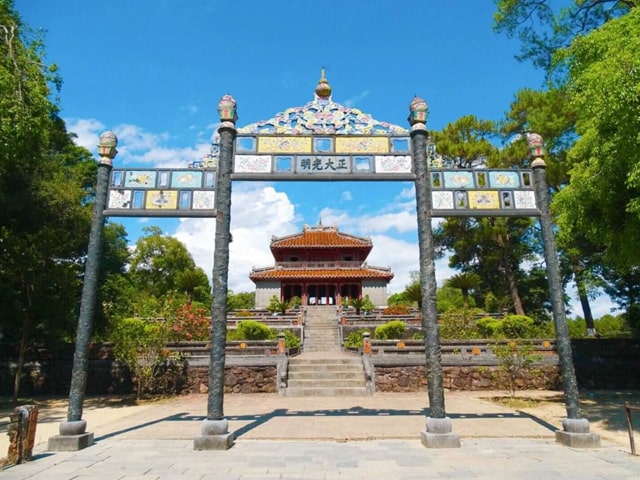