Feb
2021
For adventure seekers: Experience the wild and adventurous side of Da Lat

About 300 km from Ho Chi Minh City and 130km from Nha Trang city, Da Lat city has become a must-visit place in Southern Vietnam tours. Dalat is a dreaming and romantic city which captivates a myriad of tourists with its poetic fairy sceneries of nature and year-round cool weather. However, not only being an idyllic place for couples, but many adventure seekers also opt for Da Lat to camp in the forest, kayak, or scale waterfalls.

To feel Da Lat in a different way, Chau Yen Nhi, 25, and her friends from Saigon decided to discover the wild and adventurous side of this Central Highlands town.

Nhi and her friends arrived in Da Lat's center at 4 a.m. Afterward, they rent motorbikes and rode for 27 km to the Cau Dat tea hill to watch the sunrise. The winding pass, in the freeze of early morning, the first rays of the sun crept through the pine forest, the clouds was floating higher and gradually melted away amid the sunshine. What a peaceful moment and stunning experience, Nhi recalled. 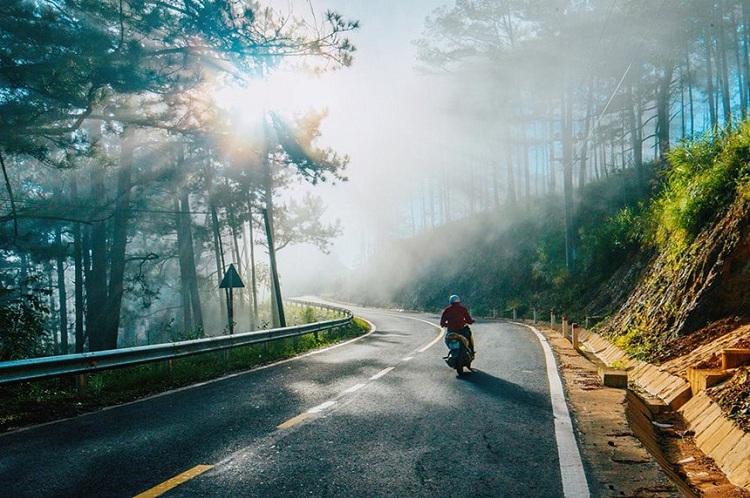 The group reached Cau Dat around 5:30 a.m., they were not the first ones here. Many other young visitors already assembled to enjoy the break of day.

After returning to the downtown, Nhi’s group had breakfast and sat at a cafe to have a rest, then they headed to Tuyen Lam Lake.

Nhi and her friends camping in the pine forest

At 3 p.m., they set up camp in the pine forest by the lakeside of Tuyen Lam Lake. Tents, sleeping bags, chairs, rechargeable lights, evening barbecue, breakfast, and drinks were all which they needed for a night together in the forest. When it started getting dark, the tent was fully put up. The fire was lit as twilight arrived. Later on, they enjoyed a BB and played music whilst it was raining outside the tent. "Everything was literally perfect and unforgettable.

However, we couldn’t admire the sunrise due to the rain," Nhi said. 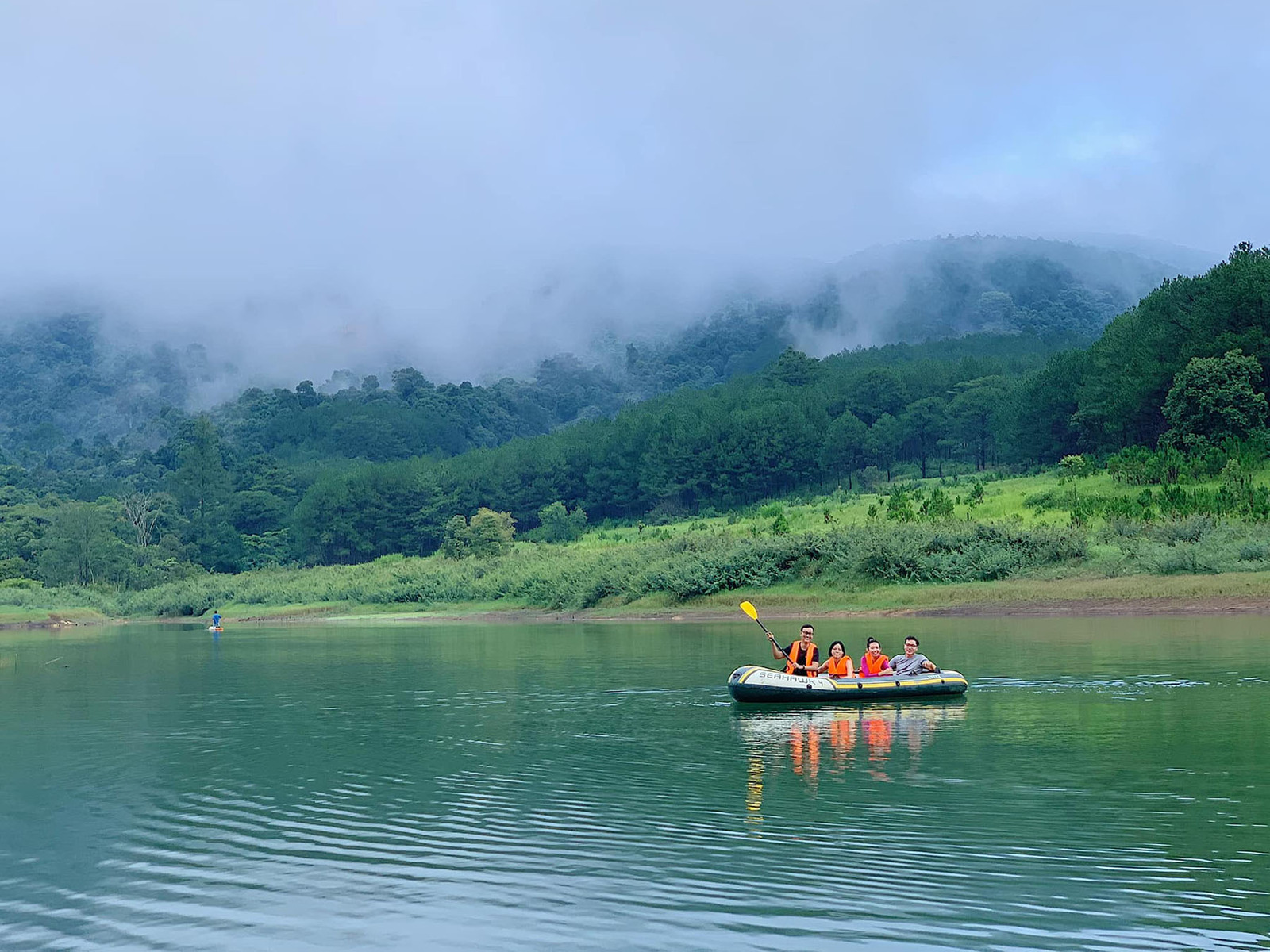 The next morning, the group Tuyen Lam Lake to admire the mountainous surroundings on an inflatable.

How to go to Cau Dat tea hill from Da lat city?

From the center of Da Dat city, heading to Ong Dao bridge. Go through the bridge then turn right about 300 meters until you see the roundabout in front of Dalat Place Hotel. Go to the 2nd exit onto Ho Tung Mau when meeting around the corner.

Then when you meet a roundabout in front of Lam Dong TV station, go all the way to Tran Hung Dao street. There is a barbershop named Dao, then you turn into Hung Vuong street. At the Ford auto store, go to Tu Phuoc. There, visitors have reached highway 20, just go up to the hill and you will reach Cau Dat tea hill.

Tuyen Lam Lake is about 7 km from Da Lat city center. It is the largest freshwater lake in Da Lat with a majestic wild beauty. Tuyen Lam Lake is surrounded by the tranquil lush green pine forest and dotted with many oases. This is an ideal place for camping to admire the romantic scenery around the lake, and also for many outdoor activities such as: Horse riding, climbing, fishing or ducking around the lake… 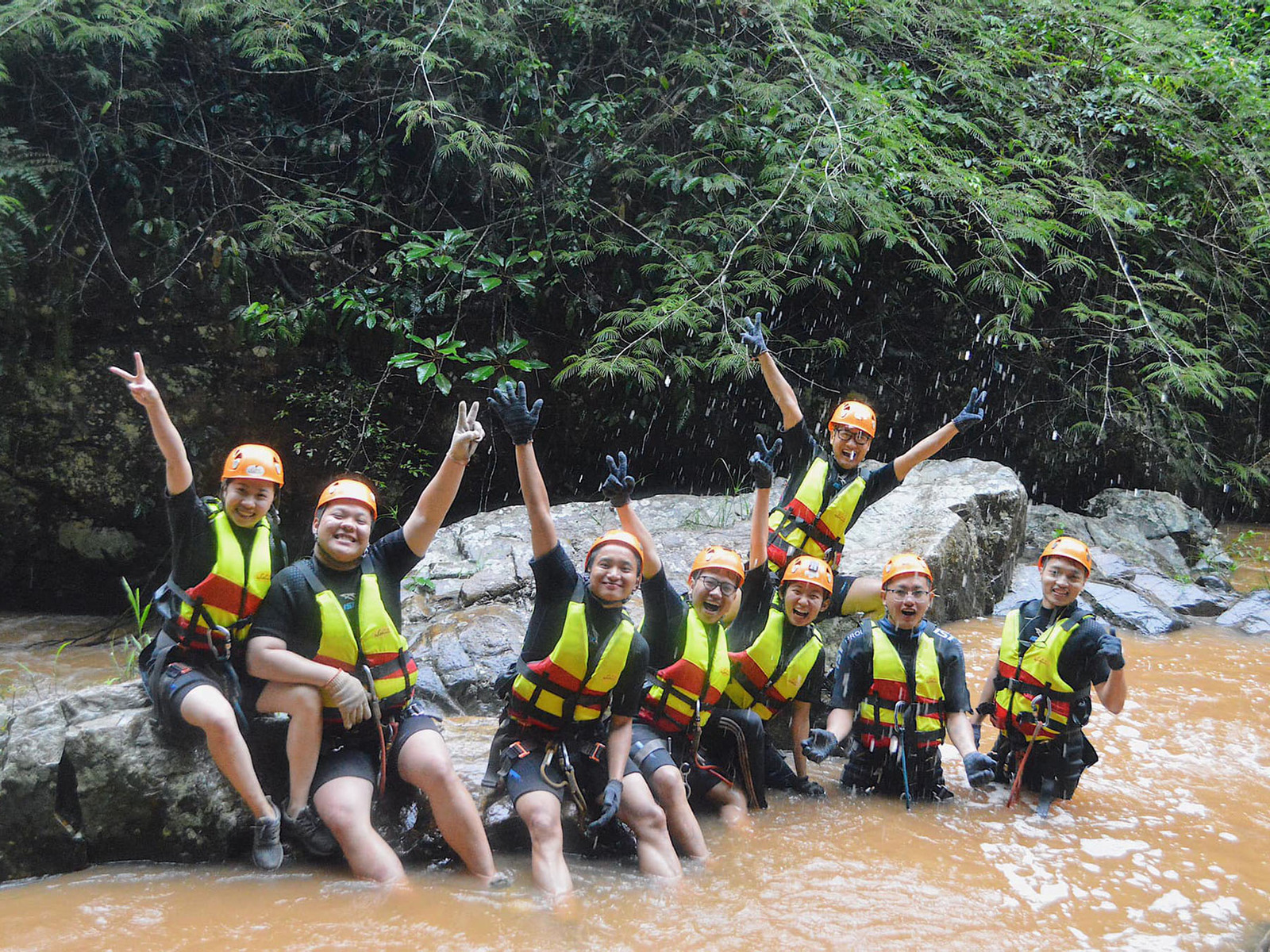 The 25-meter big waterfall scared Nhi the most, with the cold, torrential rain providing a teeth-clenching, though thrilling experience. It seems to be impossible. Waterfall is 25m high and 20m wide. The water pours down massively. “My adrenalin was getting my heart pumping, especially the remaining 5m of the big waterfall. At that time, I saw my friends and instructor screaming “Jump! Jump” that’s when I knew I had to jump into the lake, and I did it. What an amazing jump!" Nhi said. What you need is a strong heart and a cold head to converse and conquer it. 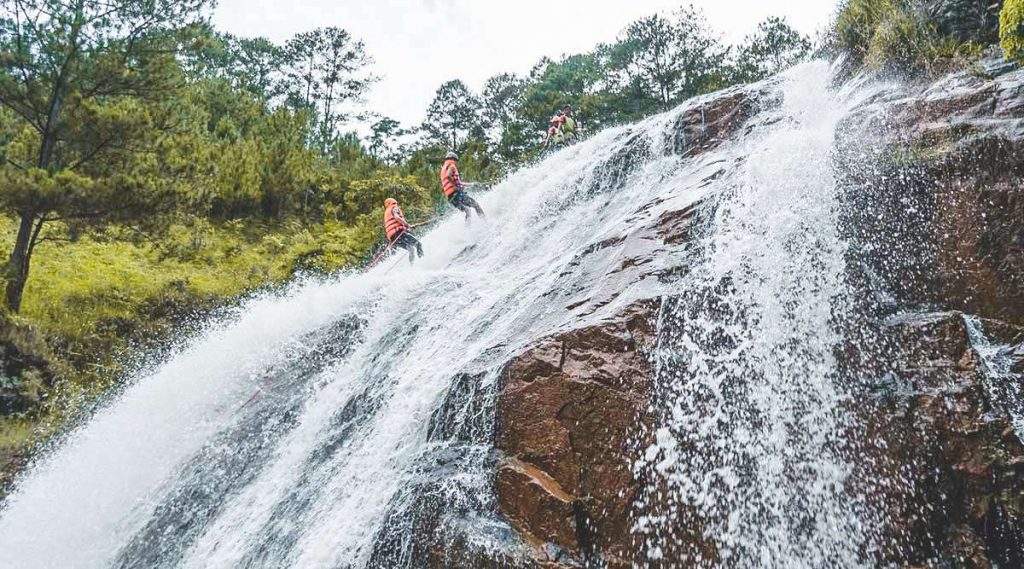 Before starting the tour, the group was trained to achieve proficiency in basic techniques and supervised carefully by their guides to guarantee safety. They were equipped with specialized equipment such as harnesses, life jackets, helmets, ropes, carabiners, figure8, wetsuits.... What you need to prepare is a strong heart, believing in yourself and following your own intuition are key lessons Nhi and her buddies learned from this once in a lifetime canyoning trip.

Where is Datanla waterfall?

Datanla waterfall is just 6km from Dalat city centre, to get to the falls take Highway 20 a few kilometers south of Dalat. Datanla is a choice for those who are an adrenalin junkie and love jungle and water.

After two days full of wilderness and adventure, the group spent the last day relaxing. They opted for staying at a villa on Le Hong Phong Street of Ward 4. 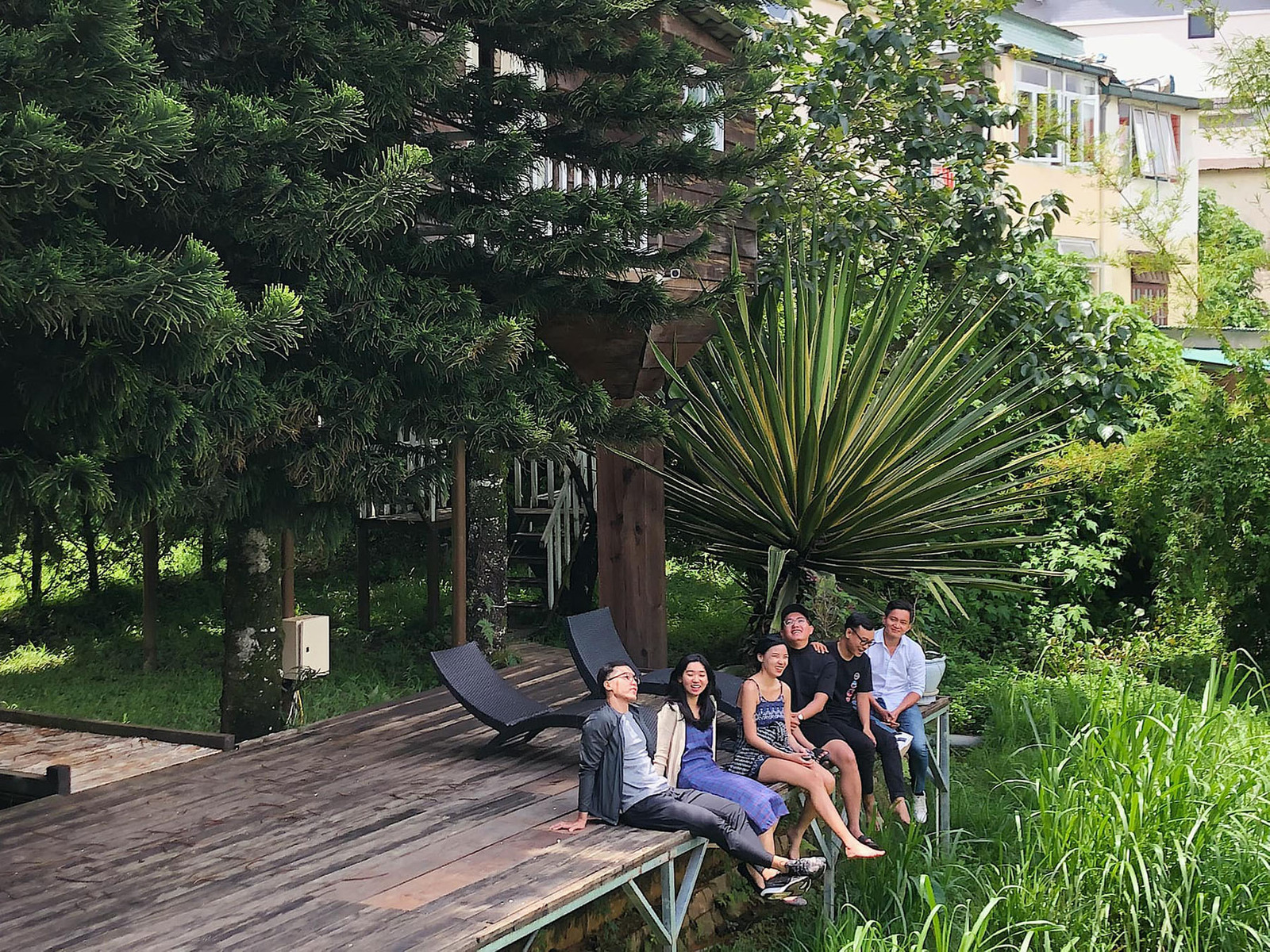 The French-style building is nestled amid an emerald garden, complete with a fairy-tale-like path weaving through the pine trees back toward the house. A lotus lake dots in the middle of the yard, surrounded with fragrant rose and rosemary bushes. "What a happy ending for our friends trip as the last day in Da Lat, the sky was clear and soothing, everything was just so tranquil," Nhi said.

The only disadvantage that the group experienced on this trip was the cold rainy weather most of the time, which made the rowing and stargazing at the lake impossible, the forest way was slippery and the adventure of conquering the waterfalls became more difficult.

Total cost of this three-day and two-night Saigon- Da lat trip for the group of seven is about VND3.8 million ($164) per person, of which, the camping service is VND 650,000, Datanla waterfall tour over VND1 million, and return bus ticket Saigon-Da Lat, VND 500,000. 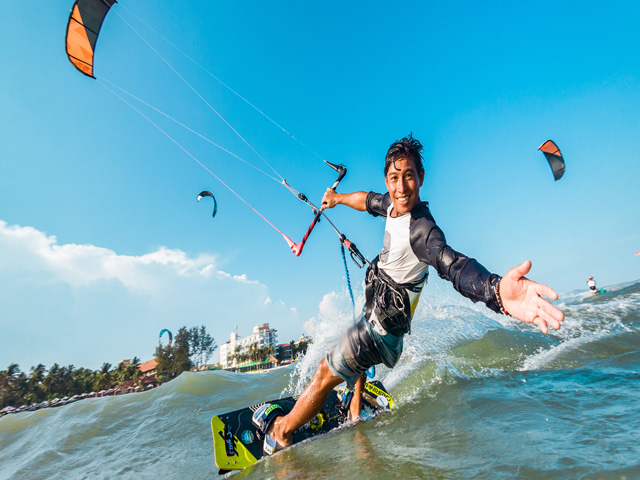 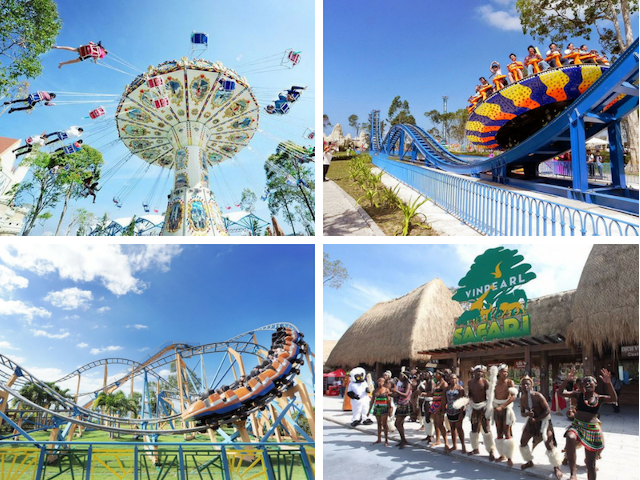